These 12 standout spirits are elevating the reputation of Canadian whisky. 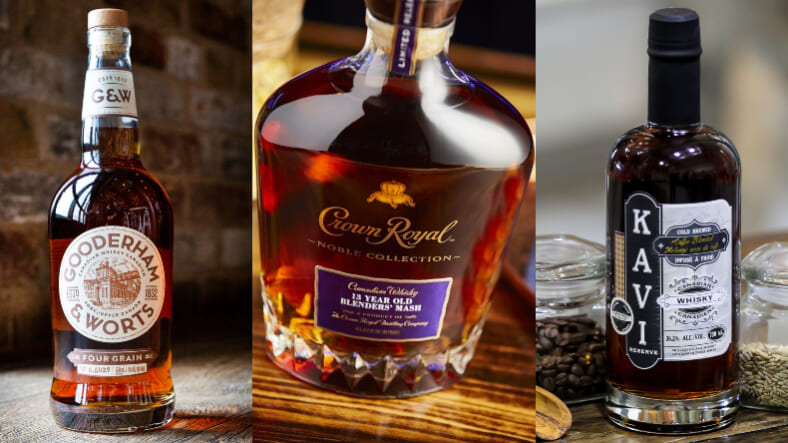 When you think of Canadian whisky (no “e”, eh?), your mind probably jumps to Crown Royal and its signature purple velvet bag. Or, perhaps, a well bottle of Canadian Club or a high-rye whisky meant for sipping on chilly winter days. But the Canadian whisky category is not just confined to bottom-shelf, bland bottles or pricey cold-weather spirits—it’s a surprisingly diverse, creative category that sails under the radar of most whisky drinkers.

Yes, Crown Royal and other legacy brands like Seagram’s and J. P. Wisers brands account for a lion’s share of the best bottles. But there are a spate of newer brands (Sheringham, Devine, and Howitzer among them) and innovative bottlings popping up that are swinging for the fences, making a case for pouring more Northern spirits in your glass.

“You’re starting to see other distilleries using French Oak, Sherry casks, and other creative finishes,” says Don Livermore, Master Blender at Hiram Walker & Sons. “I think the envelope for Canadian whisky is being pushed. It’s only going to get better and better—our biggest struggle is telling people what we’ve got going on in Canada.”

Canadian whisky is cleaning up at major industry awards, and imbibers are starting to catch wind—the category has jumped 112 percent over the last few years according to the IWSR, and grew in +4.3% in volume in the U.S. last year. Canadian whisky now accounts for 32% of whisky volume.

“We’re on the cusp of a Canadian whisky renaissance,” says Livermore.

How Did Canadian Whisky Become Popular?

Canadian whisky took off between 1861 and 1865 during the Civil war. Northerners stopped drinking whisky from the South, so they started filling their glasses with Canadian spirits. “The men also went to war, so they shut down the distilleries and melted down the metal for ammunition,” says Livermore. “Drinking became a problem in the war so there were prohibitions inside the camps. Canadian men like Wisers, Hiram Walker, and Henry Corby took advantage of this, and started smuggling Canadian whisky across the border. The whisky industry in Canada took right off.”

Now, compared to other categories, laws are lax in Canada, making for a vast, colorful spectrum of whiskies. Canadian whiskies don’t require mash bills or age statements on their labels—they are only required to have a minimum age of three years in barrel. This gives distillers a chance to flex their creativity, running wild with blends, ages, grains, and barrelings.

“A key defining factor for Canadian whisky is the method for production,” says Jake Barnett, of Old Fashioned Beverage & Hospitality. “American whiskey is made by creating a mashbill (say 51% corn, 33% rye, 16% barley), then combining those grains and making your whiskey. In Canadian whisky production, they actually ferment, distill, and mature single-grain whiskeys (meaning one made entirely from corn, for example), and then blend the final products.”

How Do I Drink Canadian Whisky?

“Though the flavor profile of Canadian whisky can vary greatly due to the broad guidelines, it is known by most bartenders for its lighter character,” says Barnett. “It’s a great candidate for highballs and citrus-forward cocktails. The classic Gold Rush (traditionally bourbon, lemon juice, and honey syrup) benefits wonderfully from a Canadian whisky substitution—try Lot 40 in one. I also enjoy using Canadian whisky with a high-proof, oakier bourbon in a split-base Old Fashioned. My favorite version is 1.5 oz Pendleton 1910 with .5oz Booker’s Bourbon, with 3 dashes of Angostura bitters and a bar spoon of rich simple syrup.”

Gooderham and Worts is the oldest whisky brand in Canada, if not one of the oldest in North America. They launched their first bottle in 1832 and spread like wildfire, becoming one of the most profitable brands across the continent.

Today, the brand’s pillar blend is the Four Grain, a whisky that nods to the brand’s milling history. “I made a whisky that honored the original millers. I wanted to create a blend where you can taste all four of those grains: corn, wheat, rye, and barley,” says master blender Livermore. “What I find, is you get bready and nuttiness right up front, about 30 seconds in you get sweetness that goes across the tongue, and you get to finish with the warm Canadian hug that is rye.” $38.50

As cold brew starts to invade whiskies around the world, so enters Kavi Whisky’s cold brew-infused spirit as one of the frontrunners in the new guard of Canadian whisky. The custom Ontario grain Canadian whisky is blended with locally-roasted cold brew coffee then left to marry in-barrel. While coffee liquor can conjure images of overly sweet Kahlua iterations, the whisky is steeped with coffee beans and aged in charred oak barrels to give a mellow, coffee-accented finish rather than a saccharine sip. ~$38

Pike Creek 21-Year-Old Oloroso Cask walked away with top honors this year at the Canadian Whisky Awards, with the brand’s master blender Livermore taking home Blender of the Year. So safe to say, the juice is good. The limited-edition bottling finds the whisky matured in a different exotic barrel—this year, it was Oloroso sherry, imparting tones of red fruit and toasted cereal to the liquid. $33.99

“Canadian blends can also deliver plenty of excitement! Each year I look forward to the new release in the Crown Royal Noble Collection,” says Lindenmuth. “The 13 year old Blenders’ Mash was so good it landed the number 5 spot in Whisky Advocate’s Top 20 of 2018. And Crown Royal French Oak Cask Finish, released in 2019, scored 93 points in Whisky Advocate for its seductive butterscotch flavors laced with peppery spice. Best of all, these dynamic Canadian whiskies sell for around $60. Grab some before the rest of the world wakes up to them!” $28.89

This whisky is a bit of anomaly—there’s no category for cask strength blends of varying proofs in the whisk(e)y world. So J.P. Wiser’s blended cask strength lives in its own category; a 64.3% blend of cask-strength rye whiskies (pulled from individual casks of 23-year-old rye and corn whisky between 50 % and 70%) with a heated palette of ripe cherries and green apple. “This is fantastic,” says Livermore. “I love this one.” $150.25

”My favorite Canadian whiskies come from Vermont—or at least by way of Vermont,” says Whisky Advocate’s resident whisky expert Jeffery Lindenmuth. “WhistlePig made their name by finding and sourcing amazing Canadian rye whiskies that were intended to be blended into big mainstream blends. The power and poise of these whiskies is unlike anything you’ve tasted from Canada: The pinnacle of their collection, a series of very limited releases, goes by the name Whistlepig Boss Hog.” $338.99

Howitzer stands out on shelves with slick nostalgic branding that tips a hat to distinctive Canadiana. But don’t confuse nostalgia with dustiness: this small-batch whisky is a modern cocktailer’s best friend. The fragrant notes of baking spice and caramel and a smooth finish make it a stand-up backbone in whisky-based cocktails. The liquid is matured for five years, finished in ex-American oak bottles, and best sipped rink-side on a snowy day. $34.95

The cult favorite gin brand (think rhubarb and rose among the top-sellers) took a swing at brown spirits with its first 2018 whisky release. Dillon’s keep local sentiments in their spirits—rye is 100% Ontario-grown with a mashbill of 10% malted rye and 90% unmalted rye, all harvested within a stone’s toss of the distillery. It’s a classy rye with a breeze of ripe peach and wood spices.

“If you’re a whisky sipper and want to see what Canadian whisky is capable of, have a pour of Caribou Crossing,” says Barnett. “It’s a lush single-barrel whisky with wonderful notes of toffee, light spice, and a creamy mouthfeel. One of my favorite neat pours of any style of whisk(e)y, period!” Each bottle is made by sampling a collection of over 200,000 barrels. $54.99

“Tap 357 Canadian Maple Rye whisky exemplifies this pairing of flavoring components, soothing the potent rye finish with the sweetness of maple syrup,” says Hauk Cornell, a bartender at Galley in West Palm. “While I enjoy this whisky on a large cube of ice as an evening dessert, I love mixing it with lemon juice, a splash of sweet vermouth and a spiced tea mixture consisting of cardamom, cinnamon, cloves, ginger, black tea, and star anise. I serve it either hot or cold with nothing but a maple bitters dripped sugar cube alongside. This cocktail gives the drinker the option to enjoy a robust cocktail with a tickle of maple dancing on the tongue, or to drop the sugar cube in and explore the rich explosion of maple and vanilla undertones of the whisky.” $32.49

Over in British Columbia, Devine distillery sources ancient local grains for its spirits—think spelt (dinkel wheat), emmer (farro), khorasan, and einkorn, in addition to a barley base, then aged in New American oak quarter casks. It’s a heated sip packed with herbal flavors and wood spice. Note this one won’t sit on the Canadian whisky shelves as it is aged for less than three years. $78.95

Over on the west coast, Sheringham turns out excellent small-batch whiskies (that are, albeit, tough to get your hands on). Distiller Jason MacIsaac runs with a variety of interesting mashbills, including red fife, a Canadian heritage grain. The location next to the ocean imparts refreshing, oceanic qualities to the sips (particularly, a kelp-based gin). Many of the whiskies are still aging, so keep an eye out for this distillery as barrels come to maturity. Price Varies