Dig into the hottest all-meat diet known to man. 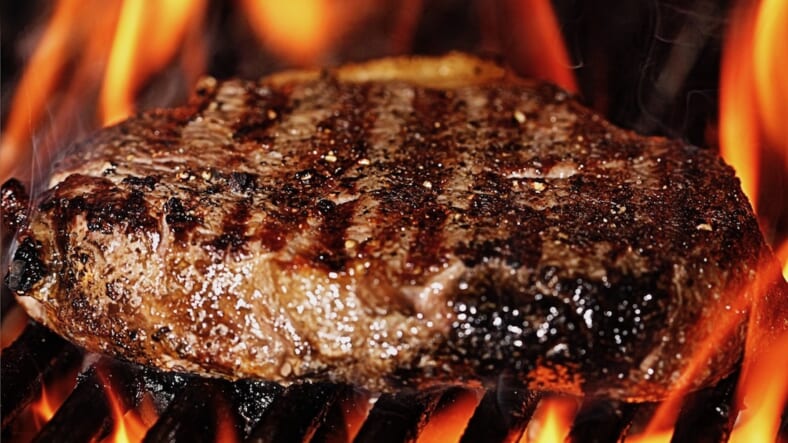 The so-called “carnivore diet” exploded in popularity after Canadian professor Jordan Peterson raved about it on the Joe Rogan Experience podcast last year, claiming it helped him lose 50 pounds, stop snoring, cured his autoimmune diseases and gingivitis, and helped him overcome depression.

But just what is the carnivore diet? In short, it’s a close relative to the ever-popular keto diet but instead of being very low carb, it’s zero carb and consists of only meat and high-fat animal products — meaning no vegetables, bread, or anything else.

This means you’re only eating fatty meats, cheese, butter, and drinking water, milk, coffee or tea, and if you’re so inclined, heavy cream. Though some people even take it a step further and cut out dairy products too, since dairy is metabolized as sugar.

The diet anecdotally claims to encourage fast weight loss, improve mental clarity, promote easier digestion, improve athletic performance, and alleviate certain health problems, but there hasn’t been scientific research on the diet so there’s not much to back up these claims except word-of-mouth from people who’ve seen these results.

Regardless, there is previous research that might justify these claims. According to a 2013 study published the journal Metabolism, those who ate high-fat and low-carb diets had lower markers of systemic inflammation than those who eat high-carb and low-fat diets.

One of the main reasons why eating only animal products could potentially lead to specific health benefits is due to eliminating ailment-causing foods, because almost everyone has an intolerance to something. Not eating a specific food that might be causing low-grade but constant inflammation in your body is obviously going to have fantastic benefits.

Another plus is that it may increase your levels of testosterone. A study published in the American Journal of Clinical Nutrition found that men who followed a high-fat, low-fiber diet for 10 weeks had 13 percent higher testosterone levels than men who ate low-fat, high-fiber diets, suggesting that the large amounts of fat you’d eat in the carnivore diet might have some manlier benefits than you’d expect.

However, some (or many) may argue that the carnivore diet is completely insane and if humans were meant to only eat meat, we’d be born with a full mouth of only canine teeth to rip apart said meat. But we have grinding molars for a reason: Humans should be eating foods other than animal products.

While our bodies can survive on different diets, it doesn’t necessarily mean we can thrive on just one food source — at least in the long term.

Your body would start to have severe dysregulation, within six months, of the majority of the processes that deal with metabolism; you would have no short-chain fatty acids in your cells; most of the by-products of gastrointestinal polysaccharide fermentation would shut down, so you wouldn’t be able to regulate your hormone levels; you’d enter into cardiac issues due to alterations in cell receptors; your microbiota would just be devastated.

In other words, the carnivore diet is not healthy for long-term dieting. When you think about it, it’s actually a no-brainer. The human body requires a very wide range of vitamins, minerals, and trace nutrients for cells and tissues to work properly, and only some of those are found in animal products. You can’t get the nutrients found in dark leafy greens from a steak.

“There’s so much evidence on phytonutrients from plant foods and how they help with DNA protection,” Brian St. Pierre, R.D., Director of Performance Nutrition at Precision Nutrition explains to Onnit. “If you’re not consuming those things, your guess is as good as mine as to how that’s going to impact you long-term.”

Furthermore, there’s likely an increased risk of developing colon caner with the carnivore diet. “I would highly suspect that an all-animal diet would increase your risk of colon cancer,” he adds.

“You wouldn’t be consuming things that help to inhibit colon cancer. So the dose makes the poison. Having a few servings of red meat each week is no big deal, but when you’re eating three steaks a day with nothing else, that’s a different story. You’re changing the equation substantially.”

But again, as a short-term diet plan, it seems to be promising so if you’re considering going on the carnivore diet, here’s a carnivore diet-friendly food list  as put together by Chomped:

Meat: Your main calorie source should come from fatty cuts of grass-fed meat like NY strip steak, porterhouse, ribeye, 80/20 ground beef, t-bone, bacon, pork chops and flank steak. Since you’re restricting carbohydrates, meats with more fat content are preferred so your body can use those fats as a source of energy.

Fish: Salmon, sardines, trout, mackerel, and catfish are allowed. Just like meat, aim for the fattiest fish you can purchase.Eggs. Also known as nature’s multivitamin, eggs are the perfect ratio of protein, fats, and essential nutrients to keep your body performing at its best on the carnivore diet.

Dairy: Milk, grass-fed butter, and cheese are technically allowed since they come from an animal but many carnivore dieters try to keep dairy intake at a minimum since a large percentage of the population eventually develops an intolerance.

Fatty meat food products: Use lard, tallow, and other animal-based fats to cook your food instead of vegetable oil.

Condiments: Salt, pepper, herbs, and spices are allowed on the carnivore diet. Stick to simple ingredients that don’t contain any sugar or carbohydrates. If you want some flavor with your meat, consider adding some zero-calorie hot sauce like Frank’s Red Hot.