May the Coke be with you. 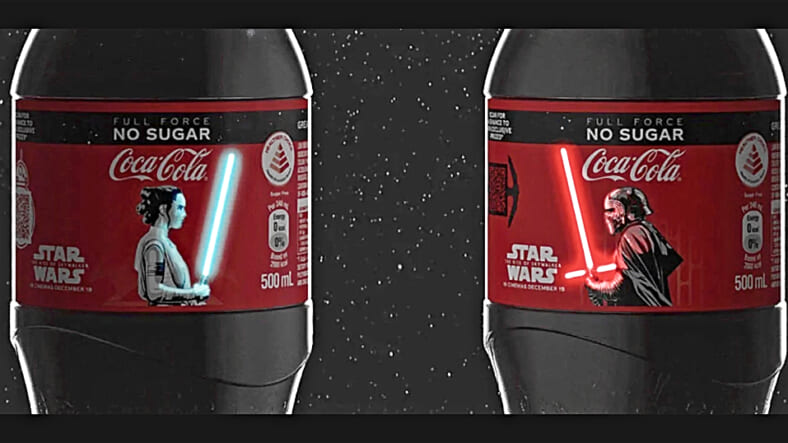 Coke and lightsabers don’t go together if “coke” means cocaine. That just sounds dangerous. But if we’re talking about the iconic soda, that’s another matter. At least it is for Coca-Cola Singapore, which is distributing limited-edition bottles adorned with characters from the upcoming Star Wars: The Rise of Skywalker—think Rey (Daisy Ridley) and Kylo Ren (Adam Driver)—wielding lightsabers that light up if touched.

The labels were created by a German OLED startup, Inuru.

Keep your eyes on these Limited Edition Lighted Star Wars: The Rise Of Skywalker Coca-Cola No Sugar Bottles! In anticipation of the upcoming movie, we will be releasing 5 clues to 5 locations per day on our FB, IG, and website on where to get your hands on one over the next 3 weekends (Fri – Sun) from 6 to 22 Dec. Let the #GalacticHunt begin! >> Link in bio Catch Star Wars: #TheRiseofSkywalker in cinemas this 19 December. #StarWarsSG *T&C applies

The Berlin-based company claims the labels have a printed battery built-in and it has enough juice to light up to 500 times.

Inuru also says the OLED is ecologically safe, as they didn’t use rare metals to make them.

Coca-Cola only made 8,000 bottles and they have a special purpose aside from just looking cool. Fans have to work to buy one of these. Coke will release a riddle via Instagram and Facebook. Fans who solve it will track down “gatekeepers” adjacent to Singapore 7-Elevens.

Once a Coke enthusiast has gotten that far, they’ll need to get a pass—kind of like the Golden Ticket from Willie Wonka—which they can redeem to get one of these special soda bottles.

The promotion is called “Galactic Hunt” and it began on December 6. It will run through December 22.

Star Wars: The Rise of Skywalker premieres in theaters everywhere on December 20.