“I respect other Irish whiskeys, but I am coming in strong, with passion and with purpose.” 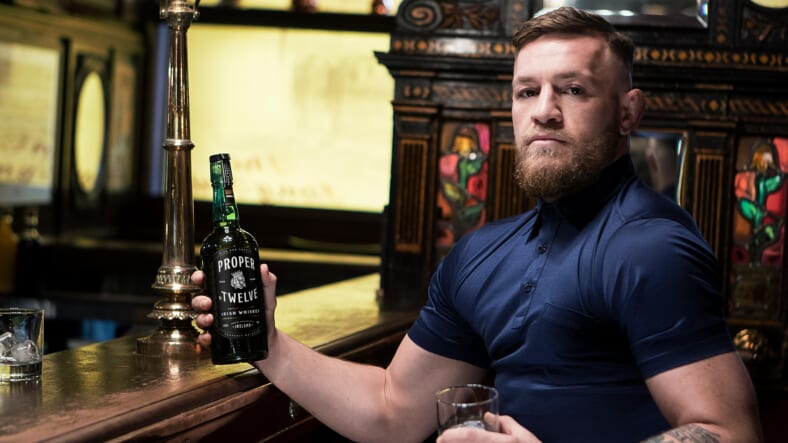 Conor McGregor is bottling the fighting Irish spirit that’s made him an MMA superstar.

“We created close to one hundred blends and ultimately selected what we knew was the one and only proper whiskey blend,” McGregor said in a statement.

“We took the time to develop an incredible whiskey and I’m excited to share it with the world.”

“I come from a place called Crumlin, in Dublin 12,” McGregor said. “It’s a place dear to my heart. It’s where I learned how to fight; it made me who I am today. It’s a place I’m still very much a part of every single day of my life. So, that’s where the name came from. It’s proper Irish whiskey and twelve is my hometown.”

“Growing up on the streets of Dublin 12, I learned the values of loyalty and hard work,” he added. “I respect other Irish whiskeys, but I am coming in strong, with passion and with purpose. I am the founder of this company and I am going to give it my all.”

Irish whiskey is a hot commodity that industry insiders say may be scarce in the coming years. McGregor’s blend is described as “complex and sophisticated yet smooth and approachable with hints of vanilla, honey and toasted wood.” Which sounds like a pretty good Irish whiskey.

The UFC phenom’s signature booze comes on the heels of a raft of other celebrity-endorsed booze brands, including George Clooney’s Casamigos tequila, Ryan Reynolds’ Aviator Gin and Metallica’s Blackened whiskey.

As one of the highest-paid athletes in the world, “The Notorious One” stands to rake in even more cash if Proper No. Twelve is a hit among whiskey drinkers. But he’s not the only one who will benefit—$5 of ever case sold will be donated to local first responders and charities.

“First responders all over the world are the unsung heroes who act with courage and answer the call of duty every day for people in need,” McGregor said. “I have great respect for these men and women.”

Proper No. Twelve Irish Whiskey will retail for $25 in liquor stores across the United States beginning this month.

Pour yourself a dram while you watch McGregor’s megafight against the undefeated Khabib Nurmagomedov on October 6.