Featuring a mixture of Nicaraguan, Honduran, and Dominican tobaccos, with a Honduran binder and a milk chocolate-y Ecuadoran wrapper. 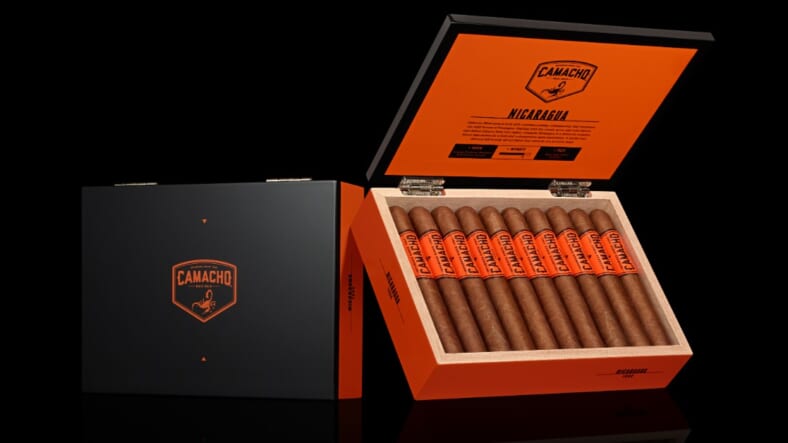 Your next cigar should be Davidoff’s newest line of crowd pleasers: the just-released Camacho Nicaragua.

The three size line of orange-labeled Camacho smokes is the newest addition to a brand that has seen dramatic change in the last decade, including total rebrands and re-blends across the board, as well as a handful of new lines and limited editions. And this may be our new favorite—for now.

Camacho’s parent company Davidoff has had wild success over the better part of the last decade with new Nicaraguan releases. The core Davidoff Nicaragua line’s award-winning blend isn’t just one of the best—it’s also one of the most affordable in the Swiss company’s portfolio (you can buy our favorite—the Davidoff Nicaragua Robusto—here).

Like its Davidoff counterpart, this summer’s Nicaraguan Camacho release is not a puro, but rather a blend of tobaccos from multiple countries. The cigar’s filler blend features a mixture of Nicaraguan, Honduran, and Dominican tobaccos, with a Honduran binder and a milk chocolate-y Ecuadoran wrapper.

Davidoff’s Nicaraguan blends tend to be well-balanced, showing tangy hints of oak and tannins but also demonstrating some brightness and sweetness. Camacho Nicaragua takes these loose foundations and adds earthy spice and hints of dark chocolate.

“In staying true to the flavor profile of Nicaraguan tobacco, this cigar provides spicy, earthy and robust flavours. Beautiful notes of pepper in the retrohale and a subtle sweetness. The cigar is very well balanced and delights with additional flavours of dried fruits and cinnamon. A complex cigar that needs all your attention as there are many different flavours at the same time.”

Fans of the Camacho brand will find this to be a bit of a diversion from a normally bold line. Camacho is known for bolder, spicier profiles, but Davidoff’s Nicaraguan tobacco tends to be more nuanced and medium-bodied than other Nicaraguan tobaccos.

Their blenders tend to let the Honduran and Dominican leaves do most of the work on strength and spice, leaving Nicaraguan tobacco to round things out with creamier textures and more nuanced flavors.

The cigars are rolled in Davidoff’s Danlí, Honduras factory in three sizes: Robusto, Toro, and Gran Churchill. They come in boxes of 20, which you can buy here:

Clay Whittaker is a Contributing Editor at Maxim.com. His work has appeared in Cigar Aficionado, Playboy, Esquire, Forbes, Town and Country, and elsewhere. You can subscribe to his newsletter here, and follow him on Instagram here.