‘Dram in a Can’ is World’s First Canned Irish Whiskey

Check out an exclusive first look of this 86-proof Irish whiskey in a can. 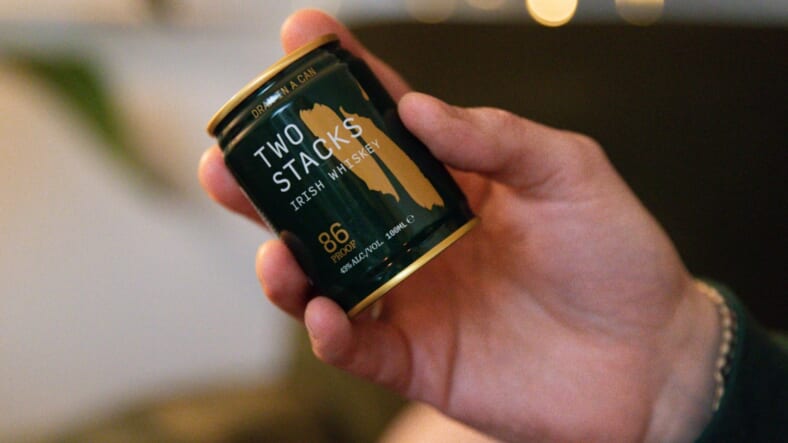 Irish whiskey fans will soon be able to enjoy their favorite spirit on the go with a new, palm-sized “Dram in a Can” from Two Stacks Irish Whiskey—and Maxim.com has your exclusive first look.

Available in the U.S. in March, the 100ml, 86-proof can of Irish whiskey is described as a “complex blend of light and dark grain, pot still whiskey, and peated malt.”

“We spent a lot of this year in lockdown developing Dram in a Can,” said Shane McCarthy, a co-founder of Two Stacks, along with Liam Brogan and Donal McLynn. “We want to offer access to premium Irish whiskey in smaller quantities—allowing more experimentation and sharing among friends whenever and wherever.”

“A four-pack of Dram in a Can is meant to be enjoyed at a dinner party, on a camping trip, after a hike, or skiing. Some may even be trying Irish whiskey for the first time.”

Dram in a Can is among only a select number of Irish whiskeys using peated malt in its blend, imbuing it with a pleasantly rounded flavor experience. It’s non-chill filtered and has no added coloring.

Dram in a Can will be available nationwide beginning March 1, with a suggested SRP of $18.99 per four-pack.

The canned whiskey will also be available in a 750ml bottle, called Two Stacks Blended Whiskey, that launches in the U.S. shortly after the can launch. The blend is matured in ex-bourbon, Oloroso sherry, and virgin oak casks before being brought down to proof and can.

“Our initial launch showcases Ireland’s first five-part blended whiskey, and the Dram in a Can is a new global first for packaging straight whiskey in a can,” Brogan says.