Eat These Essential Philly Sandwiches Instead of a Cheesesteak

America’s greatest sandwich town is on a roll. 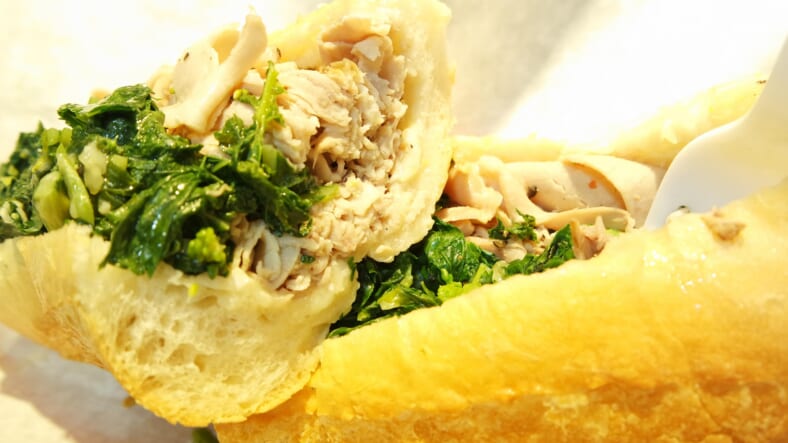 Philadelphia has long been a hallowed bastion of epic American sandwiches. While many associate Philly solely with cheesesteaks, there’s an impressively deep bench of local favorites that easily outshine the average Cheese Whiz-drenched meat missile.

After all, this is a town where lunch on a roll has been perfected to high art, and seemingly everyone has an opinion on where to get the absolute best hoagie. Here, six essential Philly sandwiches that are worth ordering instead of a typical cheesesteak right now.

The Schmitter is a Philly sandwich icon that has been grilled up on this Chestnut Hill tavern’s flat-top for more than 50 years. The crispy, crunchy, sweet and gooey bit of greatness may have the DNA of a cheesesteak, but its signature ingredients are what launches it into the sandwich stratosphere.

Sliced bottom round steak, melted American cheese, three slices of fried Hatfield salami, caramelized onions, sliced tomato and a mysterious “Schmitter Sauce” (rumored to essentially be Thousand Island dressing) join forces between a flash-broiled Kaiser roll. Eat one of these hometown favorites at the bar, and all will seem right in the world.

Side Dish: The Schmitter was named after a hungry McNally’s regular who only drank Philly-brewed Schmidt’s beer, not Phillies Hall of Famer Mike Schmidt.

The Paesano–a glorious mess of beef brisket, horseradish mayo, roasted tomatoes, pepperoncini, sharp provolone and a fried egg on a seeded roll–is the signature sandwich at this bare-bones Northern Liberties shop. But Paesano’s Philly Style is also famous for indulgently offbeat creations like The Gustaio (housemade lamb sausage with sundried cherry mostarda and gorgonzola cheese) and The Liveracce, a seriously intense paean to fried chicken livers.

Side Dish: Poe’s has no seating, but it’s perfectly fine to eat at one of  outdoor tables at Heffe’s Tacos across the street.

If there is a quintessential Philadelphia sandwich, DiNic’s Roast Pork with broccoli rabe and sharp provolone just might be it. Thinly-sliced pork loin is piled atop melted sharp provolone and topped with a bright green bedding of bitter, garlicky broccoli rabe, a blessed union that imbues this sandwich with its unique flavor.

DiNic’s “Original” roast pork sandwich is served at a furious pace from a bustling Reading Terminal Market counter for tourists and locals alike. It’s no wonder this porcine pleasure was once crowned “The Best Sandwich in America” by Man Vs. Food.

Side Dish: Check out John’s Roast Pork, the 85-year-old purveyor of a rival roast pork sandwich, to decide which version reigns supreme.

Looking for a totally legit, South Philly-style Italian hoagie? Head to Ricci’s Hoagies, a low-key brick storefront that has been serving up superior versions since 1920. There’s really only two hoagies to consider: the Regular Italian or the Old-Fashioned Italian.

The regular is loaded with salami, capicola, provolone, tomatoes, pickled peppers, lettuce, onions, olive oil and oregano, while the Old-Fashioned is a more sublime and streamlined affair packed with prosciutto, soppressata, roasted peppers and super sharp provolone (an essential ingredient that many great Philly sandwiches have in common). Both are unimpeachable examples of the genre, perfectly constructed to satisfy discerning hoagie heads.

When strolling South Street, Philly’s lively main drag, avoid the long lines of tourists at Jim’s Steaks and head to Banh Mi and Bottles, a Vietnamese restaurant and craft beer bar that serves a Philly-fied version of an iconic Vietnamese sandwich.

The Banh Mi Brisket is filled with sliced brisket braised in pho broth, sauteed bean sprouts, onions and chopped scallions on a crusty baguette with a bowl of 18-hour-simmered au jus beef broth for dunking. It may not be as authentic as the traditional banh mis made at the Vietnamese joints crowding South Philly’s Washington Avenue, but its cheesesteak-inspired twist makes it a worthy standout.

Side Dish: Banh Mi and Bottles was named the city’s “Best Restaurant Concept” after it opened in 2017.