Have The Happiest Thanksgiving Ever With Weed-Infused Turkey Gravy

Settle family conflict before it even starts with this fast-acting, cannabis-infused turkey gravy. 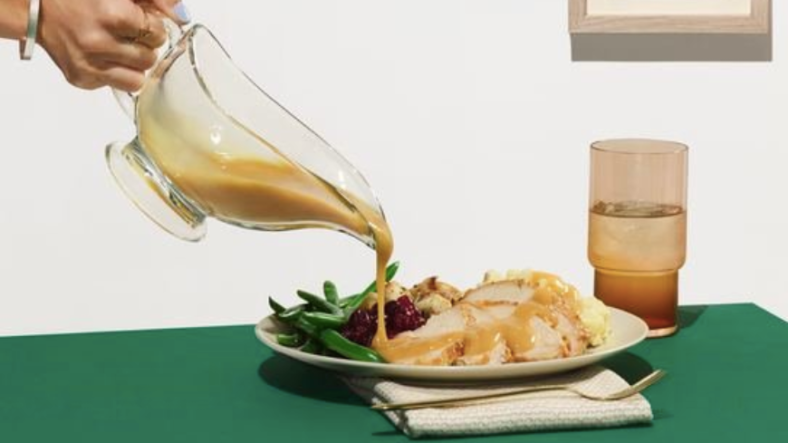 Dreading Thanksgiving and family opinions bumping against each other over the big feast? Kiva Confections, a California-based cannabis edible company, has you covered with fast-acting, weed-infused turkey gravy.

Yes, gravy with a solid 10mgs of THC, enough to turn the atmosphere around the table chilly in a good way.

Kiva’s limited-edition gravy was produced as part of a new line of products the brand is rolling out—products that could change the cannabis edibles game in a big way. From Kiva’s website:

Gravy is made with cutting-edge technology that bypasses edibles’ normally lengthy trip through the liver, instead absorbing into the soft tissue and stomach. This allows the cannabinoids to take effect in a groundbreaking 2 to 15 minutes. Most other companies who have explored fast-acting technology have employed nanotechnology particles to speed up the process. While the nano molecules used in these edibles are small, they are massive compared to the individually-encapsulated molecules used in this approach. Not only are they isolated from other molecules they might interact with, they are small enough to be absorbed directly into the body’s endocannabinoid receptors- one molecule at a time. As a result, Kiva’s gravy offers the fastest-acting and most bioavailable cannabinoids available in edibles today.

Anyone who has ever tried edibles knows the inherent danger: The desired effect may not hit for an hour or more due to that passage through the liver referenced above.

As a result, one of the biggest pitfalls in THC-infused food is consuming too much in search of that familiar quick high from smoking pot. Next thing you know it’s two hours later and you are way too high.

Kiva is cleverly trying to get around this issue in the interest of keeping customers happy—but not so happy no one can drive home for hours.

The gravy packets contain 10mg of THC and are just $5 apiece. Unfortunately, they’re only available at the moment at Sweet Flower and Grassroots dispensaries in California.