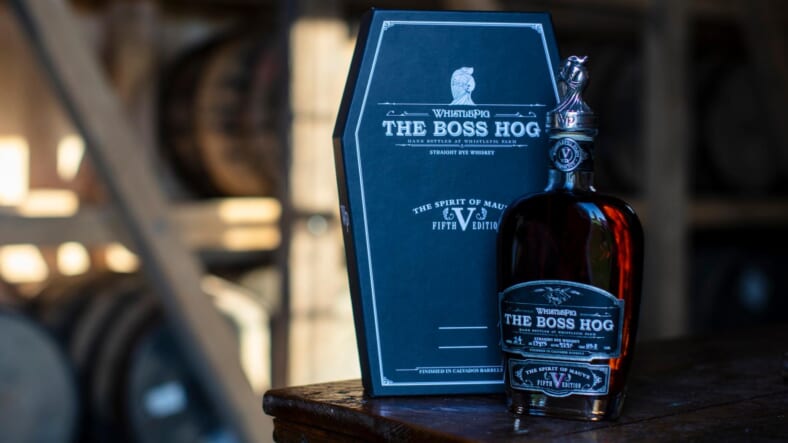 Just as crowning the world’s best bar is a fundamentally flawed concept, so is the notion of calling a beer, wine or whiskey the absolute best on the planet. It’s all a matter of personal opinion. But that didn’t stop spirits world experts from heaping such accolades on WhistlePig’s Boss Hog IV: The Black Prince, which won best whiskey and best rye at the San Francisco World Spirits competition last year.

Now, the Vermont-based distillery has unleashed the follow up to that prize-winning bottle, The Boss Hog V: The Spirit of Mauve. Not only is the 13-year-old straight rye named after a porcine Dukes of Hazzard villain, but the barrel proof hooch comes in a tiny coffin because it was inspired by the death of WhistlePig Master Distiller Dave Pickerell’s beloved pet pig, Mauve.

Pickerell recently made headlines by unleashing Metallica’s $43 Blackened whiskey onto an unsuspecting world, but at $500 a bottle, the limited-edition Boss Hog V stands to be a significantly more upscale experience.

Here, Maxim gets the exclusive first look at Boss Hog V: The Spirit of Mauve, and talks to Pickerell about his latest creation.

Last year, the Boss Hog IV won “best in show whiskey” and “best rye whiskey” at the San Francisco World Spirits competition, and some even called it the best whiskey in the world. How does the Boss Hog V compare to the IV, and is it even better?While we didn’t get the whiskey done in time to get it entered in to any competitions this year, it is my belief that Boss Hog V: The Spirit of Mauve, is better even than Boss Hog IV: The Black Prince, was. The Spirit of Mauve is not quite as bold as The Black Prince, but it is more elegant, with plenty of spice and warm apple notes.

Please explain the origin story of “The Spirit of Mauve”, as apparently the Boss Hog V is a tribute to your pet pig?Mauve was one of our first two pet pigs, along with her life long partner, Mortimer. Mortimer passed away in 2014, and Mauve mourned him ever since. They had one child together, Mortimer, Jr., whom we lovingly refer to as MJ. Sadly, Mauve passed away on Valentines Day 2018, and we suspect it was because of a broken heart.

Mauve’s guilty pleasure was apples. She LOVED apples. As such, we thought it was appropriate to announce Boss Hog V: The Spirit of Mauve, in her honor, finished in Calvados barrels. The pewter topper on this year’s Boss Hog features Mauve, in her choir robe, with her wings, looking towards heaven and her beloved Mortimer.

Whistlepig was founded in 2010. How do you manage to make 13-year aged whiskeys when you’ve only been around since then?We have never made it a secret that we started WhistlePig with whiskey from third party distilleries. All the way back in 2001, when I began working on the concept that would become WhistlePig, I began to identify rye whiskey that could be used to get the project up and running. It took four and a half years to get a building permit in Vermont, and about two years to build out the distillery. Our in-house distillery is only about three years old. We will be using third party whiskey for some time.

What’s the secret to making a rye whiskey of this quality, and how do you see the rye market expanding?Rye whiskey is amazingly spicy and complex. From my perspective, there are a few secrets to making a top-quality rye. First, there needs to be a concerted effort to minimize the effect of tannin on the final product. Second, there needs to be a focus on gaining a balance between the rye spice and the caramel extract from the barrel.

Third, the bottling proof needs to be deliberately set to showcase the whiskey in its best light. Finally, if a finish is to be applied, the right one needs to be selected and the proper amount of time needs to be used so as to gain the proper effect without overwhelming the rye taste.

What’s the best way to drink Boss Hog V? I suggest that consumers at least TRY my whiskeys neat first, because there is a reason it was bottled at that proof. Then, decide what it needs to suit their own palate…a little water, a little ice, or even a cocktail. My job is to make it so good that you can drink it any way you like. So, as long as you are enjoying it, I’m OK with it.