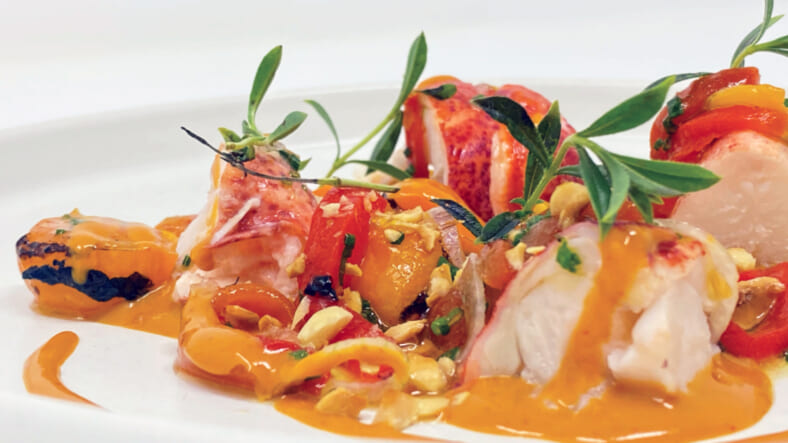 Fish House viewers and the chefs’ and barkeeps’ followers needed only their smartphones to access Instagram Live and get a behind the scenes view as the contestants charmed their fans while assembling an impressive feast for six celebrity judges.

Watch video highlights of the event below.

For the first event, celebrity chef Jose Mendin of the Miami-based Pubbelly Group competed against Craig Richards of Atlanta’s Lyla Lila, plating ingredients directly from the most responsible fisheries on open waters alongside produce from local farmers.

Chefs presented the panel of judges with three plates, including two raw dishes (Crudo, ceviche or tiradito) and one Izakaya-inspired hibachi plate centered around population-controlled Maine Lobster and sustainable Red Snapper from the Gulf Coast.

At the same time, two award-winning barkeeps competed with their own take on a historic cocktail called Fish House Punch.

The Georgia-based lineup included Ryan Smith of Macon’s Lazy Susan Tapas and James Wampler of Atlas, located in the ATL. For the punch competition, each barkeep had to choose between Buffalo Trace Bourbon or Wheatley Vodka. Both contestants chose bourbon for the punch then for late-night, they made classic cocktails with Wheatley Vodka.

While Brady Lowe hosted a discussion on sustainable fisheries and the future of food, DJ Lord of Public Enemy took guests on a musical journey.

The show is powered by behind the scenes access to barkeeps, musicians, and chef-driven video content. By reaching out to the highly diverse audience at the center of their community that values “farm to table” food preparation, Fish House Live acts as a virtual culinary summit.

Each gastro-competition is an experiential live-streaming event in which participating chefs and barkeeps present their creations to thousands of online viewers—and a panel of six judges—in hopes of being named the winner.

The original Fish House was established in 1732. Today it remains America’s first fishing cooperative in the 13 colonies. Honorary members included no less than George Washington, who was said to be a frequent visitor.

Fish House pays homage to the old world when life was simpler and food was cleaner.

With everyone spending more time at home, it’s a perfect time to enjoy one of the eight live streaming competitions catering to the 30-46 something crowd that follows food and beverage influencers, enjoys historic cocktails, rare wines, plant-based and sustainable seafood. Together, we’ll embrace this time of cooking and drinking at home with truly unique experiences.

Fish House Live will be broadcast twice a month to Maxim’s 3 million Facebook followers combined with a 250,000-strong audience following our chefs, barkeeps, and world-class musicians.

The next episode will feature Adam Sobel of the Las Vegas-based Michael Mina Group and Chad Clevenger of Alma Cocina (Atlanta). Barkeep Ryan Smith will defend his title against a challenger yet to be named.
Episode 2 will air Friday, August 28 at 7:00 pm EST.

Fish House Live was created by Brady Lowe of the Taste Network and is live-streamed from The Pantry & Provisions in Atlanta, Georgia. Fish House was developed during the Covid-19 quarantine and always features a performance from the world-famous DJ Lord of Public Enemy. Together the music and food duo of Brady Lowe and DJ Lord founded #CafeQuarantine in late March, a weekly live-streaming wine and music broadcast that explores hip hop, wine regions, historic cocktails, and craft spirits. Fish House is the newest incarnation of Lowe’s next chapter in culinary events and the future of food.