For when pouring a shot is just too much work. 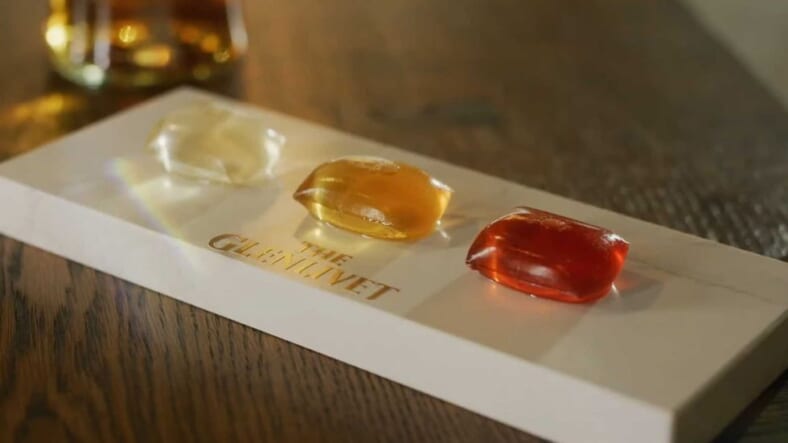 If you like scotch you’ve probably had a couple of fingers of The Glenlivet, and likely enjoyed it. It’s a classic product of Scotland and usually nicely-balanced—not too peaty, not too smoky, just so.

If you’ve stared in wonder at weird cultural moments like the time people challenged each other to eat Tide Pods, you surely never thought these things might meet one day as they just did in The Glenlivet‘s Capsule Collection—which to be precise is actually, according to the distiller, “a ‘Capsule Collection’ of glassless cocktails.”

Because it seems like a given that Tide would rather no one ever mention them in conjunction with something like this again, we hasten to point out that no detergent is involved here, just seaweed.

That’s right, seaweed subs for good old-fashioned glass in the Capsule Collection. Notpla, a company that makes sustainable packaging, created a thin membrane of edible plastic-like seaweed. The result is something that looks like a gummy vitamin but presumably tastes like the heart of Scotland. (And the sea, maybe? Ask anyone who has ever had sushi wrapped in kelp; it’s a distinctly salty experience.)

In what by now should have been a predictable reaction, social media users both famous and not freaked the hell out the moment The Glenlivet went live with its video advertising this innovation. See below.

Guys, no. NO. I enjoy your scotch, but WHHHYYYY would I replace the meditative ritual of sipping a glass of single malt at the end of the day with a lonely, Phillip K. Dick booze-pod? Discontinue these NOW. No harm, no foul. We all make mistakes. https://t.co/7HNjsJuslI

These capsule are VERY BAD for the image of scotch. In particular, you are cheapening Glenlivet. Scotch is meant to be sipped, it’s complex flavors enjoyed in micro sips. As soon as you treat it like tequila or cheap hooch, your brand is dead.

Surely this is a sick joke. Glenlivet is not a tide pod. This is an abomination. What is going on. Somebody do something @NicolaSturgeon https://t.co/qebyDjufrI

Ah, good, I was worried if the super-rich would be able to still enjoy Glenlivet while escaping the burning Earth on their spaceships. https://t.co/xR8aWgsX4V

Me: Its 2019 where are our hovercars
Glenlivet: have some whiskey testicles https://t.co/5KaOP68QIu

Suit 2: Probably because all they do is vape and eat tide pods.

In The Glenlivet’s defense, if you take away all the fusty traditionalism that surrounds the ritual of scotch consumption, it seems like a clever idea.

That said, it also feels just a little too weird, too soon.

Outraged consumers can relax, though. Odd little bags full of scotch-filled globs won’t soon take over the shelves at your local package store. Food & Wine reports that these have not been approved for distribution or consumption in the United States.

But if you’re in London any time from now through October 13, Tayēr + Elementary (a high-end bar on Old Street) will have some Glenlivet encased in a seaweed membrane available, according to Food & Wine, as “an amuse-bouche on arrival.”