1996 was apparently a very good year for very good scotch. 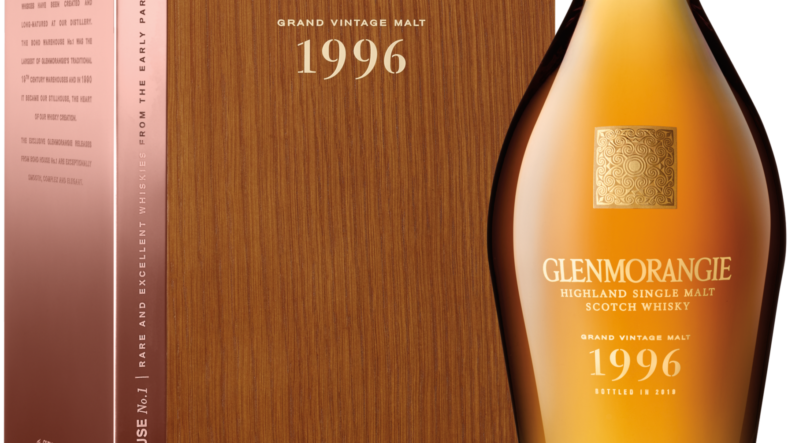 Distilled in Scotland’s tallest stills, “with necks as tall as a giraffe,” according to the brand, the creation of the scotch’s casks led Highland whiskymakers to the forests of Missouri’s Ozark Mountains. They handpicked American white oaks that would naturally bring extra creaminess to Glenmorangie scotch, then they carefully air dried the oak, handcrafted it into casks made to their exact specifications, and seasoned the cask wood with bourbon.

Finally, by 1996, some of the first bespoke casks were ready, and the result is Glenmorangie Grand Vintage 1996. Check out the brand’s official tasting notes below:

Nose: Fresh, floral and perfumed, with hints of roses, carnations, jasmine and a curious herbal note like coriander. Luscious mandarin orange and pear follow, with a beautiful candy sweetness, reminiscent of mixed fruit jellies. A splash of water releases even more floral notes of carnation and geranium, along with some soft, buttery vanilla.

Taste: A zesty, citrus mouthfeel leads into a powerful burst of citrus fruits like oranges and lemons, kept under control by the thread of soft, sweet vanilla and fudge. The finesse for a whisky of this age is quite remarkable, with gentle spices, such as ginger and sweet chilli and subtle oaky notes.

Finish: Delicate and dancing with almonds, pear and cake mix.

“Glenmorangie Grand Vintage Malt 1996 wonderfully demonstrates how we can bring our most extraordinary dreams to life. The oldest whisky we have ever aged in our bespoke casks, its fresh, floral aromas and luxuriously creamy tastes are gloriously enhanced by age,” said Dr. Bill Lumsden, Glenmorangie’s Director of Distilling, Whisky Creation & Whisky Stocks, in a statement announcing the new bottle.

The Glenmorangie Grand Vintage Malt 1996 will be available in specialist whisky shops around the world for $825 per bottle, beginning this month.