Get the best of both worlds with this killer coffee/stout combo. 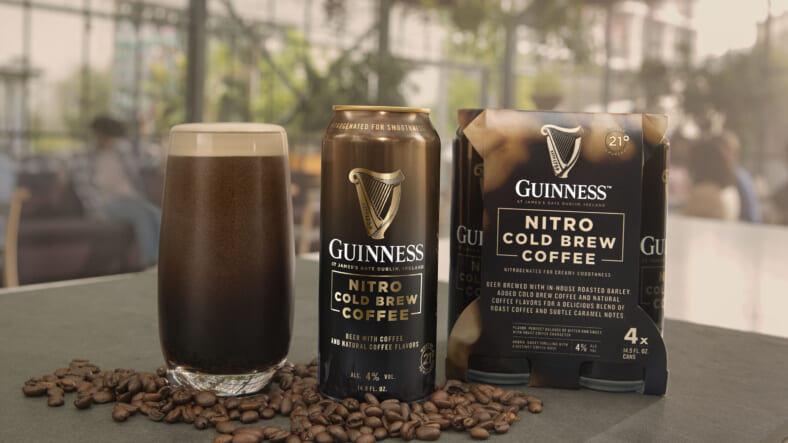 The flavor of one of the world’s most-loved beers is getting quite the buzzy shot, and it’s an innovation we can get behind. Guinness recently rolled out its new Guinness Nitro Cold Brew Coffee-flavored beer, a perfect innovation for those who can’t get enough of the iconic Irish stout (or enough coffee).

It’s here in time for warmer spring and summer days, when creamy nitro cold brew is often top of mind for many coffee lovers. And better still, after first hitting select U.S. shelves in March, it’s now available nationwide (and it’ll be sticking around the revered Guinness portfolio permanently).

The Guinness legend still relies on top-notch ingredients and exacting processes, and the Dublin brewery has taken its considerable expertise in nitro beers a step further. Guinness Nitro Cold Brew Coffee uses the signature nitro widget to infuse that same surging nitro effect that makes regular Guinness so great on draft (and indeed, out of a can).

Of course, the coffee aroma on the nose shines through, and the use of coffee itself gives this brew a balanced, bitter-yet-sweet roast flavor. It really is the best of both worlds. The result is a 4 percent ABV beer that should prove supremely drinkable, especially if you want a slight jolt of (natural) caffeine alongside your favorite beer.

Better still, serve it in a Guinness Gravity Pint Glass for the full effect. The one thing that’s sorely missing is a visit to the famed St. James Gate Brewery, a place that we should all be so lucky to experience (especially if you so happen upon the brewery during, say, the Six Nations Rugby Championship won by Ireland).

But for now, it’s best to get yourself a four-pack or two of the latest and greatest Guinness creation, priced at a very agreeable SRP of $9.99. We’ll drink to that, first with a Guinness Cold Brew and perhaps followed (responsibly) with a pint of classic Guinness.