Lovely day for a Guinness. 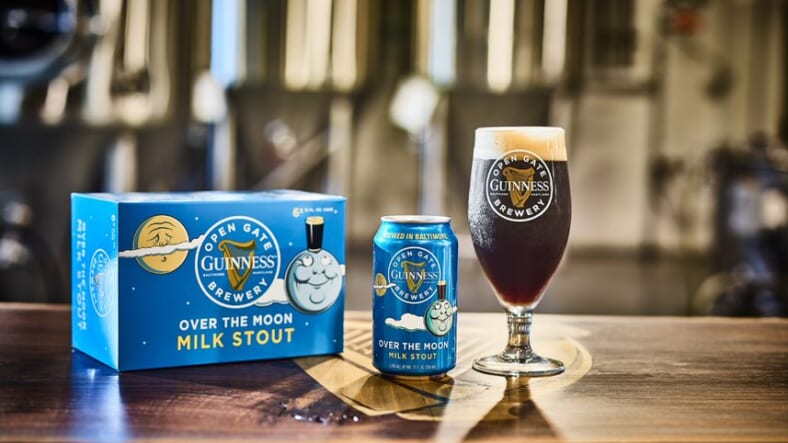 Guinness has unveiled a brand-new beer made in its new Baltimore brewery called Guinness Over The Moon Milk Stout.

The dark brew is a full-bodied stout with a creamy mouthfeel and notes of roasted malt, milk chocolate and rich coffee flavors. Packing an ABV of 5.3%, this Milk Stout harvests hints of roasted barley and hops, adding a warming bitterness that is offset with the cream-like sweetness from the milk sugars of the lactose used in brewing.

“Guinness Over The Moon Milk Stout was born from an idea to make a beer that could celebrate our stout brewing expertise, speak to a wide spectrum of beer drinkers, and also convey the creativity and versatility of our brewing team here in Baltimore,” said Hollie Stephenson, Head Brewer at the Guinness Open Gate Brewery.

“The beer has notes of caramel, chocolate, and a light roastiness that might remind some people of our historic stouts, however it finishes with a sweetness characteristic of milk stouts, which we believe makes this beer very approachable and appealing to a wider audience.”

The inspiration for the Over The Moon Milk Stout’s sky-blue packaging and smiling moon artwork came from artist John Gilroy’s iconic advertisements of the 1930s and 1950s, depicting beer-loving zoo animals interacting with pints of Guinness.

Guinness also notes that the Over The Moon Milk Stout goes well with all manner of meals, especially sweets:

Its roasted barley character pairs nicely with most grilled or roasted meats, while its subtle sweetness and notes of chocolate and coffee blend nicely with a wide range of desserts like pecan pie, chocolate chip cookies or even s’mores.

Guinness Over The Moon Milk Stout can be found on shelves now in select areas including the Baltimore, Boston, Washington D.C. and Philadelphia metro areas.

Beginning in November, the stout will also be available nationally for a limited time. It will be sold in six packs of 12 oz cans for a suggested price of $10.99.