Guy Fieri Feeds Over 1,000 Evacuees of California Wildfires With Almost No Publicity

Some think the Spiky One is putting Elon Musk to shame. 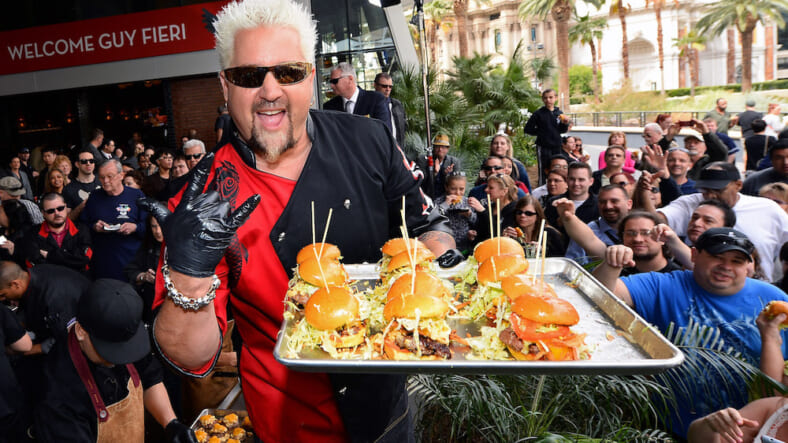 The Mayor of Flavortown is giving back.

Guy Fieri was spotted in Redding, California helping the salvation army feed evacuees and firefighters as an outbreak of wildfires, called the Carr Fire, continue to ravage Northern California.

SF Gate reports that Fieri and a crew from the non-profit Operation BBQ Relief served meals to 1,400 victims and first responders on Sunday.

That entailed Fieri tossing out signed Lean Cuisines into a hungry crowd, as if he were chucking T-shirts at a rock concert.

Guy Fieri giving out free Lean Cuisine is more lit than any rap video of 2015 https://t.co/Ix1t9jcTP9

“We loaded up our caravan from the wine country, and drove four hours up here.” Fieri told CNN.

“[We’re] just working arm in arm with the Salvation Army, and local chefs and residents and everybody, just helping out the evacuees. There’s like 36,000 folks that have been displaced, so it’s quite a program.”

Fieri added that he was “trying to keep the menu interesting.”

Guy Fieri has, with no publicity, been feeding 5000 wildfire evacuees, proving that he is a much more decent and altruistic person than Elon Musk.

The Carr Fire has burned through 95,000 acres of land, and six people, including two firefighters, have been killed. On Sunday, the fire was just 17 percent contained.

No, this is not a tornado. The Carr Fire in Shasta County created this rotation updraft. #CarrFire #California pic.twitter.com/CVvcafJBGK