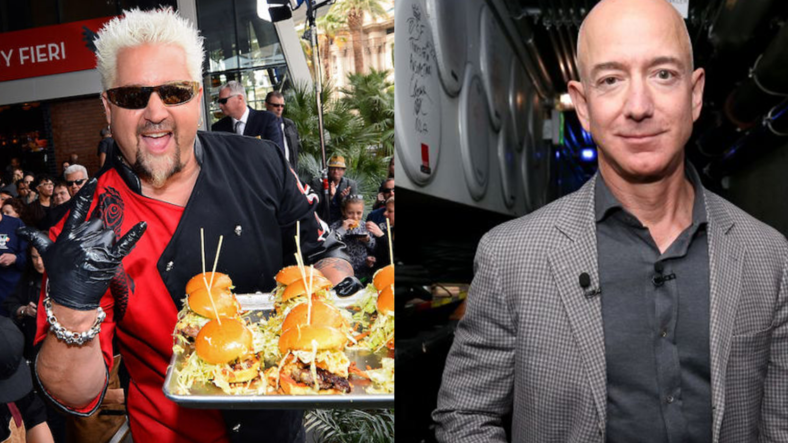 If you didn’t know that Guy Fieri was a stand-up dude before the coronavirus pandemic, you do now. The Mayor of Flavortown might be famous but he’s never forgotten his roots, and when COVID-19 landed a gut-punch to the food industry, he was ready to step up and help those most impacted by restaurant closures, servers and kitchen staff.

An outgoing networker, he didn’t hesitate to reach out to others with the means to join him in raising money to aid out-of-work food industry folks, and of course, he got plenty of help. Save from the richest man in the world, Jeff Bezos. Guy Fieri noticed, and he did not hesitate to mention this in a recent interview with The Hollywood Reporter.

Fieri was exercising near the beginning of the pandemic in March 2020 when — as he told THR — he got mad. “I don’t get pissed or lose my shit,” he reportedly said, “But I was pissed.”

So he took action:

Restaurants were closed from coast to coast, and, by Fieri’s estimation, most — the types of mom-and-pop places featured on Diners, Drive-Ins and Dives — maybe had a 10-day runway before the money dried up. It was mid-March 2020, and he was on his elliptical machine — Fieri comes up with a lot of his ideas during cardio — when he decided to ask his business manager for contact info for CEOs of major corporations. He drafted personal emails to power brokers like Amazon founder Jeff Bezos, soliciting donations for an emergency relief fund that would ultimately award more than 43,000 grants — of $500 each — to out-of-work line cooks, servers and other restaurant professionals.Today, in a crisp black button-down, Fieri opines on the crisis with an undiminished passion. “I’m not into shaming people and telling who didn’t donate, that’s not my style,” Fieri says, as he credits getting huge sums of money from PepsiCo, Uber Eats and Procter & Gamble before taking a pause. “Jeff, by the way, didn’t help us,” he shares.

It’s not like he’s punching down in calling out Bezos. As of May 2, 2021, the Amazon founder sat at the top of the Forbes list of billionaires with a net worth of $201.4 billion, literally more money than a small country’s GDP.

Fieri isn’t pulling down Bezos money, but with a major new TV deal, he’ll get a lot closer, and likely be able to help more restaurant workers and the businesses themselves, as he did in raising a total of $25 million for the industry over the course of 2020 and early 2021.

As THR reports, Guy Fieri “has reached a rare summit.”

Aside from Oprah, writes THR’s Mikey O’Connell, Fieri is “the closest thing to a flagship human currently on TV. He’ll anchor at least four primetime shows on Food Network this year, with at least three others — some starring vehicles, others just productions of his Knuckle Sandwich shingle — in development.”

Add on the fact he’s the face of food for Discovery’s new Discovery+ streaming service and is contracted to stick with the Food Network till 2024 — a deal THR says is “in the high eight figures” — and it seems like sooner or later Fieri won’t need to ask tech billionaires for help with anything.