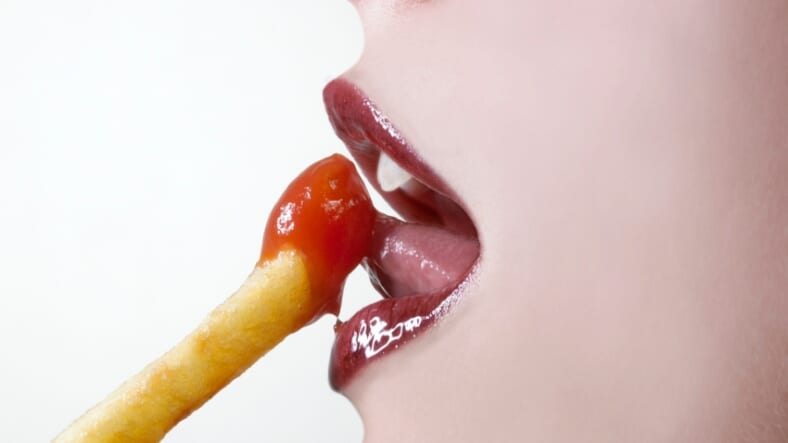 Harvard. Home to some of America’s finest minds and the gold standard in higher learning. Located in the heart of Cambridge, one of the Boston area’s most progressive, tea-drinking and quinoa-eating enclaves, Harvard also has no idea what the hell real people eat—sometimes have no choice but to eat—outside its crimson-bannered walls. Professor Eric Rimm of the T.H. Chan School of Public Health may be living proof of this.

Dr. Rimm is the epidemiology and nutrition specialist who in a New York Times article recently suggested that the healthiest way to consume delicious golden french fries is to eat only six at a time.

That’s right, the professor is apparently capable of taking a look at that mouth-watering image above and suggest eating just a half-dozen.

Of course he’s got his reasons. For one thing, he says they are “starch bombs”—which is true. Starch gets converted to sugar in the body, so fries might as well be dessert. But the Times goes on to explain there’s more to it than just that:

Potatoes rank near the bottom of healthful vegetables and lack the compounds and nutrients found in green leafy vegetables, he said. If you take a potato, remove its skin (where at least some nutrients are found), cut it, deep fry the pieces in oil and top it all off with salt, cheese, chili or gravy, that starch bomb can be turned into a weapon of dietary destruction.A study last year in The American Journal of Clinical Nutrition noted that potatoes have a high glycemic index, which has been linked to an increased risk of obesity, diabetes and cardiovascular disease.

The same study (which Rimm did not conduct, he simply added commentary) that found extra risk of getting fat from fries also found that people who consumed fries “two to three times a week were at a higher risk of mortality compared with those who ate unfried potatoes,” the Times writes.

Naturally, this news was met with outrage online, and Dr. Rimm took to Twitter to defend himself.

He’s definitely not backing off from his contention that fries are the work of the diet-busting devil.

Hey @PadmaLakshmi –
Don't be dissin' the Prof! We need culinary experts to step up and take a stance. Its easy to give diners a huge hunk of fried potatoes. Give them a tease to make them wanting more (and sneak in some greens!) https://t.co/RIoIROkANz https://t.co/1zt897VQ1t

The professor deserves some credit for fighting back, considering he lives in a fry-centric universe.

Still, eating six fries is like just eating a tiny dessert spoon full of ice cream then letting the rest of it melt. Or having sex only six times in a year. Just no.

In all honesty, he might even be right. Potatoes are simple and not particularly nutritious dirt-dwelling tubers and when cooked they are utterly saturated with oil. Not to mention the sugary wonders of ketchup, the french fry’s constant culinary companion.

But who cares if Dr. Rimm is right? He can sit around in a Harvard office slurping kale smoothies all day if he likes.

The rest of us will gladly take our chances with those crispy, savory french fries.