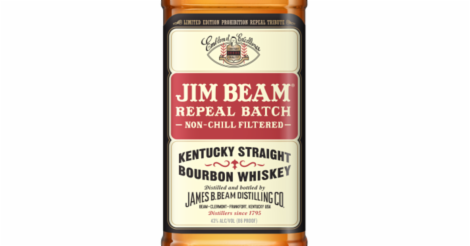 The iconic distillery is launching Jim Beam Repeal Batch, an 86-proof, non-chill filtered version of their Kentucky Straight Bourbon Whiskey that harkens back to full-flavored booze James B. Beam produced following the repeal of the 18th Amendment in 1933, which ended Prohibition in the United States.

“Much like my great-grandfather’s recipe produced after the distillery reopened after Prohibition, Jim Beam Repeal Batch is non-chill filtered to create a fuller mouthfeel,” says Noe.

“The lack of chill filtration, as well as the aging process, contributes to the bourbon’s unique flavor and honors the style of bourbon my family produced back in the ’30s.”

Each dram of Repeal Batch has a “light amber color along with oaky notes with light vanilla and brown spice aroma.”

Sippers can expect “char and caramelized tones with light sweetness and a pleasant finish of sweetness, oak and char.” Sounds about right to us.

Jim Beam Repeal Batch will be available for $17.99 at your local liquor store this September. Visit their website for further details.