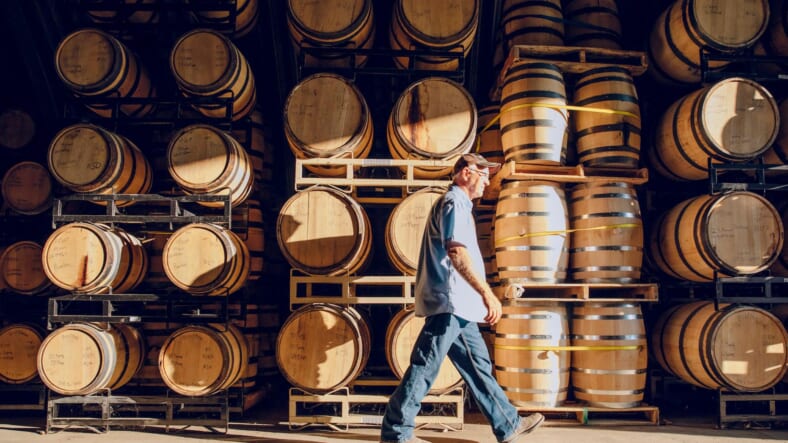 In one of the greatest tragedies in recent whiskey history, nearly 9,000 barrels of bourbon crashed senselessly to the ground during a freak building collapse at a Kentucky distillery.

The distillery, which holds up to 20,000 barrels of bourbon that was being aged, was having a wall repaired. The epic crumble brought down about half of the booze-filled structure.

There was no one inside when the roof caved in, and no injuries were reported. But the real tragedy is that each barrel holds a whopping 53 gallons of bourbon and weighs 550 pounds, so we’re talking about a LOT of wasted whiskey here.

BREAKING: Crews on scene at a building collapse at @Barton1792. Bardstown Fire Chief says they got the call around 11a. Bourbon barrels are stacked up in the mess. pic.twitter.com/4KeWMeFIun

To add insult to injury, CNN reports that a nearby creek didn’t even get a taste of any runaway whiskey flowing from the broken barrels.

It is unclear whether the bourbon spilled from the containers, but a nearby creek was of concern because of the structure’s position on a hill. Representatives from the state’s Department for Environmental Protection were dispatched to the scene. Water samples came back clean, according to CNN affiliate WLKY.

Goddamn it. This might be just the worst whiskey-related news since word came down about a looming Irish whiskey shortage earlier this month.

Let’s pour one out for all that beautiful bourbon, people. Or maybe don’t. Haven’t whiskey lovers already suffered enough?