This is getting out of hand. 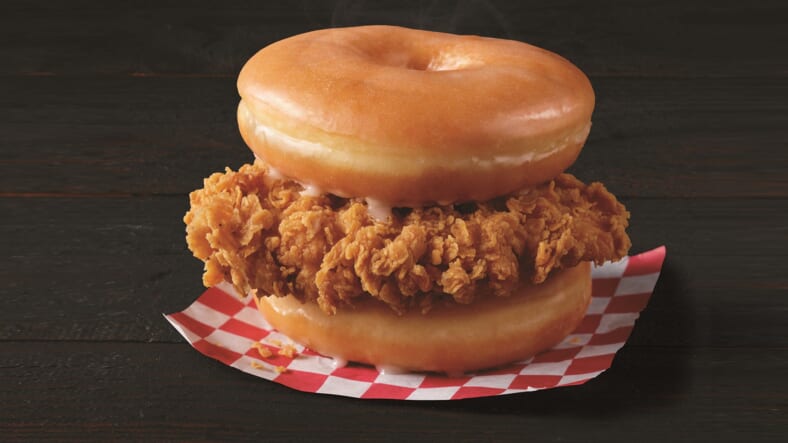 In the beginning, there was the Chick-Fil-A chicken sandwich. Popeye’s saw that it was very good and introduced their own version of the fried chicken sandwich, which many agreed might even be better than Popeye’s. Then the ghost of Colonel Sanders whispered in the ears of KFC execs and the Colonel said, “Let there be a Kentucky Fried Chicken & Donuts sandwich.”

But before you say “Amen” to that, know this: according to Thrillist, this presumably delicious idea hasn’t spread to KFCs nationwide–yet.

The basket of chicken and donuts clocks in at $5.49, but you can also order a big basketmeal, which comes with two donuts, for $7.49 (though if you want this option, maybe it’d be a better deal to get the sandwich, which comes with two donuts). The sandwich will retail at $5.99.
If for some reason you find yourself at KFC and don’t want any chicken, donuts can be added to any meal for a buck apiece.

Those are very reasonable prices for something that sounds so good and so likely to give you heart disease and diabetes in one fell swoop. (Not that health considerations ever stopped anyone before–remember the KFC Double Down?)

The million-dollar question is this: What does the internet think about this, after the Chick-Fil-A vs. Popeye’s fight? And is it actually as good as it sounds in theory?

"The all new KFC & Donuts sandwich.
When you want to let the world know you've given up without saying a word, because your mouth is full." pic.twitter.com/pwGcItAW25

Well folks the KFC chicken and donuts didn't disappoint. It was definitely chicken with a side of doughnuts. pic.twitter.com/NYqFPnVy4Y

If you’re eating that Donut chicken sandwich from KFC please unfollow me.

Two guys actually went to the trouble to record a KFC Donut Fried Chicken sandwich taste test. It’s a video podcast, really, so fast forward to about 5:45 if you want to see them get to the actual testing.

Their verdict: On the whole, it sounds pretty damn good, as if there was ever any doubt. There’s no word as to whether this crazy idea will go nationwide but in the meantime, as Thrillist suggests, you can always pick up some KFC tenders and Krispy Kreme donuts and make your own sweet and savory gut bomb.