Get your Irish up with this bold new single pot whiskey. 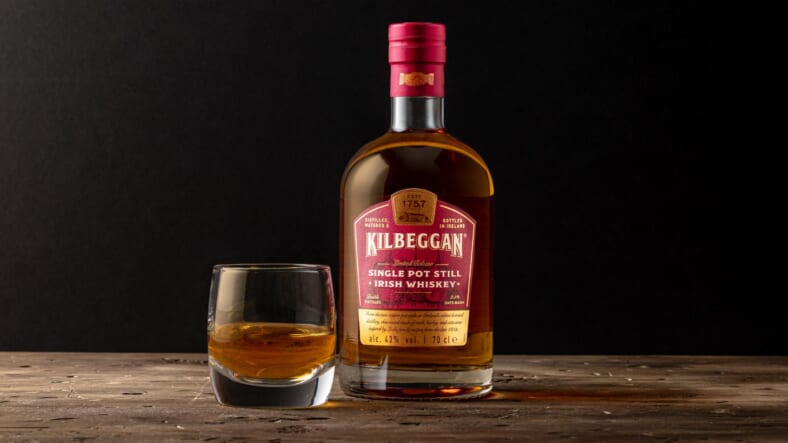 Kilbeggan is rolling out a limited edition Single Pot Still whiskey this month that’s sure to appeal to Irish whiskey fans.

For the uninitiated, a single pot still Irish whiskey is produced only in Ireland, at a single distillery that is double- or triple-distilled in copper pot stills from a mix of malted and unmalted barley and up to 5% of other grains.

Featuring a unique mash of malted barley, raw barley and 2.5 percent oats, Kilbeggan’s new Single Pot Still release was inspired by recipes used at Kilbeggan Distillery through the late 1800s. Back in those days, oats were grown across the Midlands Region of Ireland and were commonly used by distillers like the Locke family at Kilbeggan for filtration purposes, according to the brand.

Double distilled to 86 proof in Kilbeggan’s old copper pot stills – one of which is the world’s oldest working whiskey pot still today – the new spirit is the second limited release to be 100 percent distilled and matured at Kilbeggan Distillery since its restoration in 2010.

“This remarkable whiskey is a glorious tribute to the traditional Irish pot still style and the community that kept Ireland’s oldest continually licensed distillery alive over centuries of trial and triumph,” said Michael Egan, Kilbeggan’s U.S. Irish Whiskey Brand Ambassador. “It is a truly unique spirit, with a rare mash that has produced a flavor unlike anything available today.”

Kilbeggan Single Pot Still is best enjoyed neat or on the rocks, and the brand serves up the official tasting notes here:

TASTE:  Spice becomes apparent, but not overbearing, with summer fruits and citrus. Warming mid palate with a fresh mint leaf flavor leading on to a rich creamy mouthfeel.

FINISH: Initially soft, mellow, and smooth, with a creamy finish. Lingering spice and a dryness as the oat influence become evident.

The limited-edition Kilbeggan Single Pot Still Irish whiskey is available now at a suggested retail price of $44.99 per bottle.