The Metallica drummer also revealed his favorite music of 2018 and “the best action movie of the year by far.” 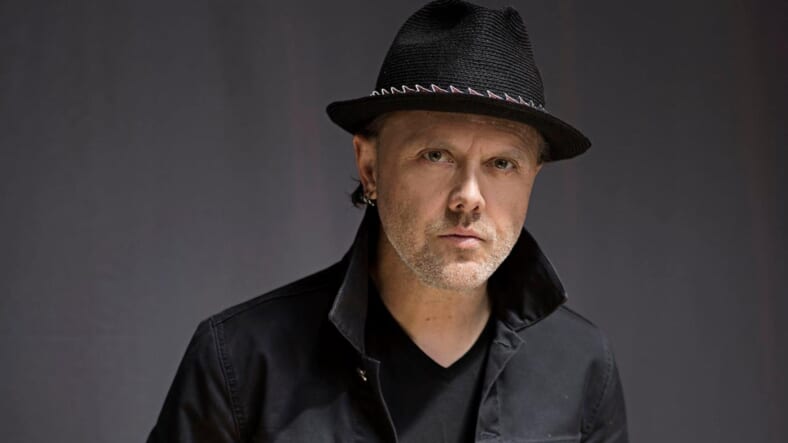 In case you didn’t know, Lars Ulrich is the co-founder, drummer and resident motormouth of Metallica, which is still the world’s reigning heavy rock band nearly four decades after first storming the early 1980s California thrash metal scene. Aside from continuing to sell out stadiums and occasionally dropping new albums (2016’s Hardwired…To Self Destruct was their strongest release in years), Metallica recently ventured into the molten hot celebrity-branded booze game.

The band’s Blackened whiskey–yes, named after the opening track from 1988’s And Justice For All…–is “sonically enhanced” by playlists of Metallica songs while aged in black brandy barrels. While it’s unclear if playing “For Whom the Bell Tolls” or “Seek and Destroy” really imbues the whiskey with “low hertz sound waves so intense that it actually enhances the molecular interaction and ultimately the finish,” as Blackened claims, sound-aging is certainly one of the more intriguing new concepts in distilled spirits.

Why did Metallica decide to launch a whiskey?

We decided a couple years ago that if we were going to do a full-on beverage, then two things: Number one, we wanted to do it ourselves. We didn’t want to just slap a Metallica logo on some pre-existing beverage. Secondly, we knew that if we were going to do it well, we wanted to have somebody take care of the practicals. I am not going to fly to Kentucky and start turning valves on and off. We decided whiskey was the first thing we were going to get into, because that seemed to be what would connect most with the fans. We knew right away we wanted a partner who was credible, who was autonomous, who was independent but also had a history of obviously being successful with their particular lane and who would be somebody we could collaborate and get along with, that could take care of some of the specifics for our vision. We found Dave Pickerell. That was really the origins, the genesis of it, about a year and a half ago.

And of course we’re talking just a few weeks after he tragically passed away.

He was just one of those guys that instantly you just fall in love with and that you trust. When I met him, I fell in love with him instantly. It felt like I’d known him all my life. It felt like he was one of us, and he came from a place of creativity. He came from a place of curiosity. He came from a place of wanting to make stuff that happens that could connect to people and to connect with the people around him. So a lot of us quote-unquote artists or whatever, we like to create. We’re curious. We like to connect with people, and we’re all sort of loners or lost souls trying to figure it all out. I say that in the best way possible, but he was somebody that we just connected with instantly.

The most unique thing about Blackened is the sound-aging concept of Metallica songs playing while it’s being aged in the barrels. Can you describe how that works?

The idea was: “What can we do to make this ours and separates it from what the guy down the street is doing?” We were just looking for what we would call an authentic way of tying the music and the beverage together. We thought if you could actually have the beverage experience the music in some way, shape, or form, and there was a way that it actually would influence it to some degree…I say this with a grain of salt. This is supposed to be somewhat fun, you know? It was always something that was of great interest to Dave, and he was actually a chemical engineer at West Point. There was this whole thing that he gets into, when the sound waves hit a particular frequency range then it intensifies the molecular, I guess, action with the barrel and the whiskey, and this type of stuff. That was his idea. It was something he brought to us.

It’s amazing gimmick, but do you think it actually makes a difference in how the whiskey tastes?

I think that it depends. Do you believe in UFOs? Do you believe in Bigfoot? Do you believe in whatever? To take a position on this, certainly Dave felt that this made enough of a difference to be able to tell the difference in the taste. Now, obviously, if you sit down, talking about music—If you and I sit down and talk about music, I can hear things in music or be analytical about music or intellectualize certain things about music, that maybe in the same way that you can sit down and talk to me about journalism or the history of Maxim or whatever—do you know what I mean? That I wouldn’t know. In the same way that Dave would be able to sit down and talk about things in whiskies and tastes and process and all of this type of stuff that obviously a mere mortal like myself or you would not be able to tell the difference, but to him there was enough of a difference. This was obviously his forté.

Did you have a particular favorite playlist of those batches?

I can’t tell you that I prefer one over the other. I loved doing the playlists and sitting and taking deeper songs from our catalogs. I’m the one that writes the set lists when Metallica does concerts, and so it’s fun for me to sit and pick out different songs. You do some unexpected songs, you do a fast, old school thrash song, and then a newer, more melodic thing or some ballad-y type thing or mid-tempo thing or whatever. Trying to put these playlists together that become journeys that you can take when you’re sitting, enjoying a tasty beverage with your friends.

How did you come up with the look of the bottle?

When we decided to do this, we felt we understood that part of it.  A lot of whiskies have this Old West, Frontier logos. They have an older school type of thing to it, and that’s fine. But we were trying to see if we could make it a little more modern, a little sleeker, a little more straighter lines and give it a little bit more of something that’s maybe for a slightly younger generation, rather than your dad or your granddad’s generation. If you look at the bottle, it’s more straighter lines and square, and it’s not so rounded. The logo is straighter and looks a little more modern. It doesn’t have an 1880s Wild West logo and all this kind of stuff.

I know you’re an avid art collector. How did your own taste inform those design choices?

The stuff that moves me is contemporary design, mid-century design, ’50s, Scandinavian, Danish, Arne Jacobsen, Poul Kjaerholm, a lot of minimalist stuff, Japanese minimalism. What I bring to it is encouraging it to go in that direction. You bring your own aesthetic to the music, to the artwork, to the t-shirts, to the beverages, to the stage show, to whatever it is that’s going on that you’re presenting. Then it becomes this balancing act between the different creative forces. But absolutely, yes, I love art, and I collect art, and I collect furniture. I’m interested in art history and art philosophy and understanding design.

Do you have a favorite Metallica album cover?

I’m not much for favorites. I guess speaking about what we were just talking about, the Load and Reload albums with the amazing pieces by Andres Serrano, they will always hold a special place in my heart. I love him as an artist. I love the imagery. I love the fact that we saw Serrano through as the cover art for those two records. Those are probably my two favorites.

Serrano is great. There’s also such a cool legacy of Metallica t-shirt designs. Which of those have stood the test of time for you?

We did a lot of things with the artist named Pushead. A lot of the ones that he did for us in the late ’80s and early ’90s, I think, are iconic. The way that he interpreted the songs, the lyrics, and then drew these incredible images. Most of them were based around what we’d call the “Damage.” Like the Pushead skull that he introduced in 1986. There was something very iconic about all that, and I think probably looking at all the t-shirts that we’ve done, those are the ones that still stand out to me when I look at all the different things we’ve done for the last 30-plus years.

Are you listening to any new music that is really inspiring you?

When I’m working out or driving from point A to point B, I listen more to the Arctic Monkeys than anything else. Their new album that came out in May is just an incredible record. It just makes you want to go back and revisit their whole catalog because each record is so different. You’d go back and revisit things from previous records and fall in love with them for different reasons than you did five years ago or eight years ago. I would say when I think of 2018, the main musical mainstay is definitely the Arctic Monkeys for me. But lately I’ve spent a lot of my free time seeing films.

What are some of the best movies you’ve seen this year?

I saw Julian Schnabel’s new film, At Eternity’s Gate, which I thought was amazing. It’s about Vincent Van Gogh, the painter, and Willem Defoe plays Van Gogh. It’s absolutely amazing. Then there’s this film called The Favourite. It’s with Emma Stone and a few others. Then there’s this Polish film, which is by the director who won the Academy Award for Foreign Film about five years ago for a film called Ida, his new film is called Cold War. Oh, and this amazing film called Free Solo. I don’t know if you’ve ever heard of this, but these are guys that climb without ropes.

Yeah. Basically, it’s like a vertical granite wall in Yosemite, I think it’s 3,000 feet tall, without a rope or without safety harnesses or anything. Talk about the mind fuck of all mind fucks. It’s just unbelievable compared to any action film you see or anything, and this is real. He’s climbing without ropes and just straight up. You’re just sitting there with sweaty palms and an accelerated heartbeat and wondering how this is all going to play out. I would encourage anybody to see it. It’s the best action film of the year by far.

I’ll be sure to check it out. Are there any new visual artists you’re into these days?

There’s certainly some Scandinavians. I collect a lot of what’s called Outsider Art. I’m particularly interested at the moment in art by people who have are self-taught. In French, it’s called art brut or “raw art.” There’s a bunch of really exciting stuff. Barry Simons is a particular favorite of mine at the moment. Donald Walker, Dwight Mackintosh. It’s just stuff that really moves me. It’s self-taught artists. Donald Walker is probably in his late 80s, early 90s. When you see his art, it looks like it was created by a five-year-old child, and is completely void of any kind of ego or any kind of thought about where it’s going or where it begins or where it ends. It’s just completely impulsive and in the moment, and I really love those kinds of approaches.