That’s one way to make a point. 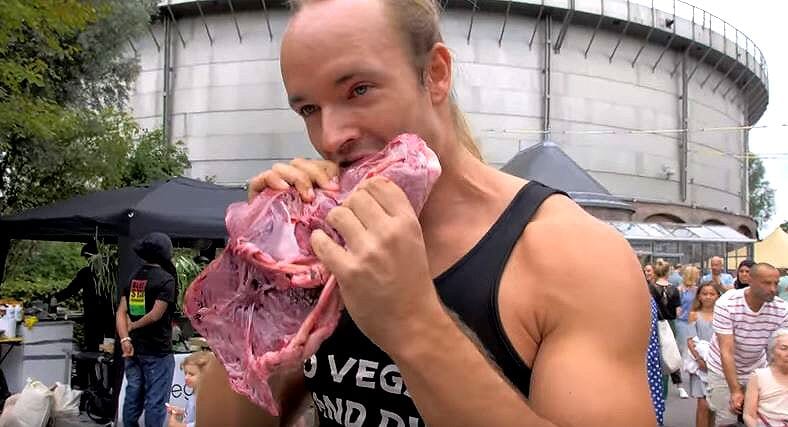 A meat-loving provocateur stirred up passersby at a vegan food festival by eating a raw veal heart while wearing a shirt that says “Go vegan and die.”

YouTube user sv3rige’s now-viral video has racked up nearly 375,000 views. In its description, he wrote, “vegans are malnourished” and “they hate nature.”

He conducted his strange demonstration for an hour at Amseterdam’s first-ever Vegan Food Festival, according to the Independent.

“It’s ruin[ing] our health,” sv3rige says at one point during his protest. “I was vegan, I almost died,”

“OK, that’s good for you! Then don’t be a vegan,” a non-vegan patron responded.

Police eventually confronted sv3rige after receiving numerous complaints from attendees, but no arrests were made.

A festival spokesperson called the protest “shocking” and explained that a “children’s program” was happening at the same time.

“While it is of course not forbidden to eat raw meat, it was of course a shocking sight because there was a puddle of blood and fat,” the spokesperson recalled.

“Besides, there were lots of elderly people and children. At that time a special children’s program was going on.”

“It was a weird protest by the gentleman,” the spokesperson added. “This festival is about having fun and sharing new experiences.”

That’s one experience those festivalgoers will never forget.