DO fear the reaper. 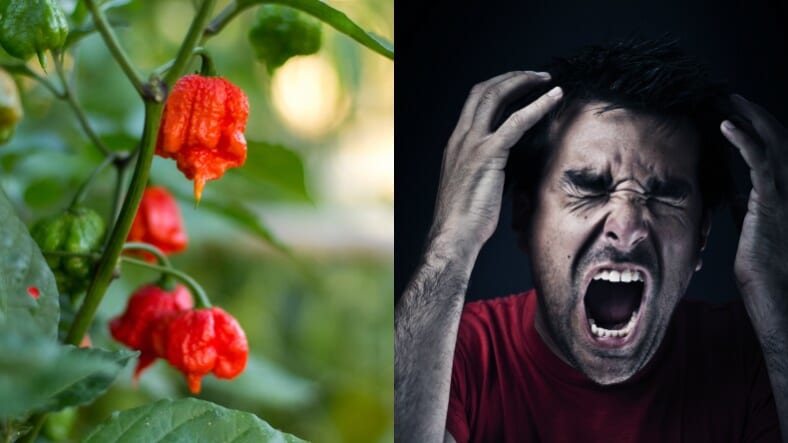 A 34-year-old man competing in a hot pepper eating contest landed in the hospital after consuming the infamous Carolina Reaper.

The American-bred chili averages 1.57 million on the Scoville heat scale, and was declared the hottest pepper in the world in 2016 until it was dethroned by something called Dragon’s Breath.

The man began experiencing excruciating “thunderclap” headaches for days after he ingested the pepper and was dry heaving by the time he decided to seek treatment at a New York hospital.

The Guardian has further details :

“[A thunderclap headache] lasts for a few minutes and it might be associated with dry-heaving, nausea, vomiting – and then it gets better on its own. But it keeps coming back,” said Dr Kulothungan Gunasekaran of the Henry Ford Health System in Detroit, a co-author of the report, adding that thunderclap headaches can be caused by a number of problems including bleeding inside the brain or blood clots.

He was diagnosed with reversible cerebral vasoconstriction syndrome (RCVS), a phenomenon that occurs when arteries in the brain suddenly narrow.

RCVS even has the potential to cause death via a stroke, but the official case report states that our guy was back to normal 5 weeks later—though we’re guessing his Reaper eating days are over.

Someone should let these naive YouTubers know that they’re taking their lives into their own hands—especially the psycho below who at three(!) Carolina Reapers and washed them down with nearly an entire bottle of Fireball.

Check out some other valiant attempts below: