Pizza For Breakfast Is Healthier Than Sugary Cereal, Nutritionists Say

Go ahead and grab that morning slice. 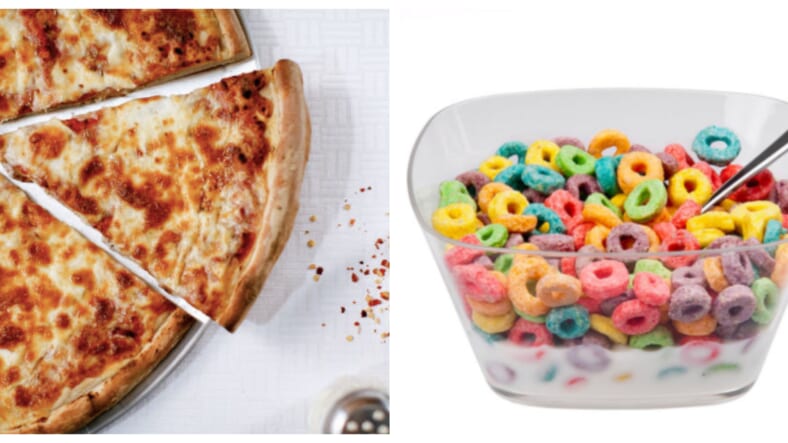 In 2018 a nutritionist created a stir with the claim that pizza would make a better breakfast—healthier breakfast—than cereal.

Chelsey Amer is the expert who made the claim, saying in part that “pizza packs a much larger protein punch, which will keep you full and boost satiety throughout the morning.”

This is irresistible. It’s affirming, for one thing—all those shameful moments in college munching a pepperoni slice at 6:30 am don’t feel quite so shameful anymore—and it feels like it just makes sense, given Amer’s point about protein.

Australia’s News.com.au has weighed in on the question and found the truth may be a little less cut and dried, writing that “it depends on what sort of pizza and breakfast cereal we are talking about.”

Noting that many cereals popular in the United States are heavily processed and mostly made of sugar, News.com.au’s Susie Burrell writes that there are still plenty of healthy cereals on the market and their ingredients include “oats, muesli and bran flakes, which can be teamed with protein-rich toppings,” like greek yogurt.

Recent Australian data exploring the diets of breakfast cereal consumers published in the journal Nutrients, revealed breakfast cereal eaters have lower BMI’s, have healthier diets throughout the day, consume more whole grains and dietary fiber and consume the lowest amount of added sugars each day.So while there are some sugary breakfast cereals out there, this does not mean that all breakfast cereal is a poor breakfast option.

Basically, then, saying that pizza beats cereal as a nutritious way to begin the day is at best imprecise. Everything depends on the type of pizza or the type of cereal you choose, and what you add to it.

So choose one or the other, but choose wisely. Whatever you do, just don’t skip breakfast completely. Another recent study found a correlation between skipping the first meal of the day and an elevated risk of early death from cardiovascular disease. CNN reports:

After a person’s age, sex, race, socioeconomic status, diet, lifestyle, body mass index and disease status were taken into account, the study found that those who never had breakfast had a 87% higher risk of cardiovascular mortality compared with people who had breakfast every day…

We’re never missing another morning meal and also sticking with nutritionist Chelsey Amer on this one.

Sugary cereal is great for many things—the munchies, plopping on the sofa for a retro cartoon binge, buying your dentist a new Ski-doo—but pizza is the bomb. Muesli can stay in Whole Foods where it belongs.