“GET TO THE CHOPPA.” 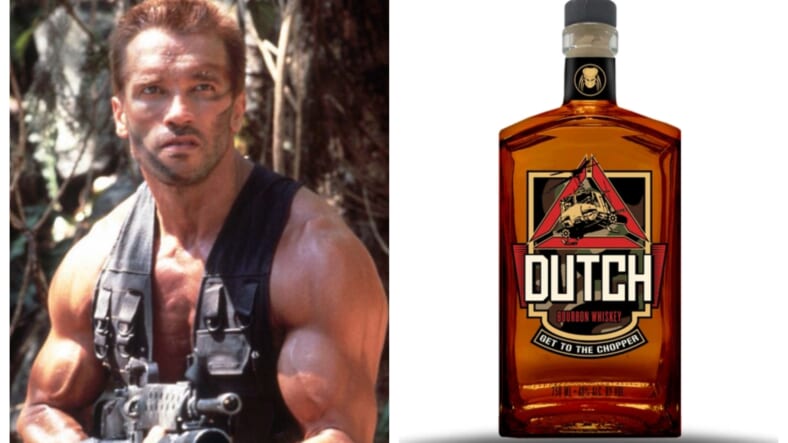 Arnold Schwarzenegger‘s  thick Austrian accent and over-the-top line readings have inspired automatic and enduring pop culture memes. “I’ll be back,” from The Terminator, “Hasta la vista, baby,” from Terminator 2: Judgment Day, and of course, “GET TO THE CHOPPA,” from the original 1987 Predator.

The last is why new Dutch Bourbon Whiskey from Fox and film tie-in specialists Silver Screen Bottling Company is immediately memorable and will have you getting out a shot glass to grab a taste in nothing flat—you can’t see the “Chopper” slogan at the bottom of the label without hearing the Austrian Oak bellowing away.

Dutch was actually created to go along with the DVD and On-Demand release of Shane Black’s The Predator, which hit theaters in September 2018 and… didn’t do well.

According to tasting notes in a press release, Dutch “is fit for a person on a mission with a bold taste for adventure. This whiskey will do more than cover you with mud, it will take you to a new level with its full-bodied flavor and hints of vanilla, coconut, and [bergamot].”

Movie flops are always depressing. For fans of Arnold’s Dutch, the new flick’s tanking only confirmed once again that if you don’t have Ah-nuld in the driver’s seat, you don’t really have a proper Predator.

That said, if you jump on it soon you can have a proper shot (or five) of Dutch and round up all six Predator movies and see if they just get better and better as you drink.