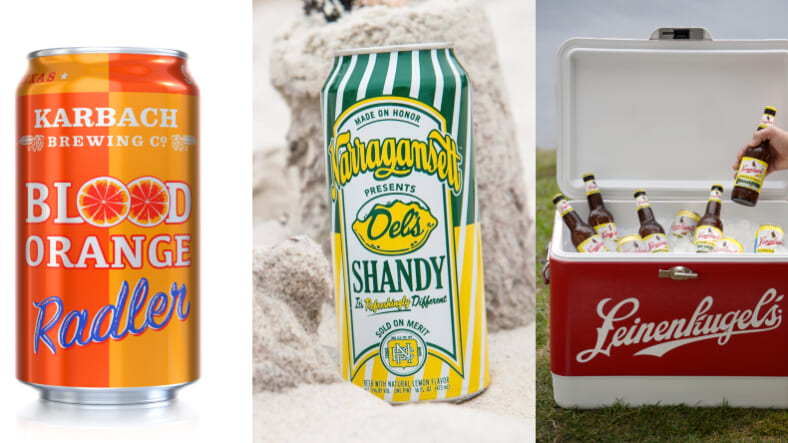 Summertime is a great time of year to crush beers. But when it gets really hot, you might be looking for something a little lighter, more refreshing, possibly even fruity. Enter the radler or shandy, both of which are essentially low-alcohol beer mixed with carbonated fruit juice.

The story goes that the radler was conceived of in Bavaria as a drink for thirsty cyclists (“radler” means cyclist in German). The shandy is essentially the same thing, invented by the British as a mixture of beer and ginger ale. Nowadays, many different breweries are making their own versions of these popular beers, so check out this list and start drinking.

This beer is Rhode Island all the way, a collaboration between Narragansett Beer and Del’s Frozen Lemonade. Lemon concentrate and a bit of sugar are added to the classic ‘Gansett Lager, resulting in a refreshing New England summer beer that pairs well with fish or grilled chicken.

Texas-based Karbach Brewing Company has two radlers, a lemon and ginger version and a blood orange version. Try drinking the latter beer for breakfast if it’s hot enough outside – it’s got orange juice in it, after all, no shame there.

Colorado has a lot of great beer – Coors included/excluded depending on your tolerance/admiration for piss-thin American macrobrews. Great Divide Brewing Co.’s Roadie Grapefruit Radler is a bright and citrusy beer, an ale brewed with grapefruit puree that is tart, bitter, and refreshing.

Sam Adams has been around for decades and stands as one of the forefathers of the modern craft-brewing scene. The brewery now churns out a whole mess of different beers, including Porch Rocker, a Bavarian style radler that infuses lemon into golden German helles beer. It’s only available from April to August, so hurry up and drink it before summer ends.

Leinenkugel’s makes a few different shandies, but the best has got to be the original Summer Shandy. It’s a Weiss beer (or wheat beer) that is combined with lemonade – not too sweet, not too tart, pretty much just the right balance to create a light, refreshing summer treat.

Austria knows a thing or two about radler beers, with Stiegl leading the pack. The grapefruit radler is naturally cloudy because it’s basically just grapefruit juice mixed with beer. It’s also pretty low in alcohol so you can drink a whole bunch of these without getting too sloppy.

Schofferhoffer is all radler, all the time – specifically grapefruit, in this case. It’s a 50-50 mix of hefeweizen, or light wheat beer, and carbonated grapefruit juice that can be mixed in cocktails as well as enjoyed on its own.

UFO Beer, brewed by Harpoon Brewery, makes a Pink Lemonade Shandy that is exactly what it sounds like – a mix of pink lemonade and light beer. It can also be frozen to create a sweet and super refreshing slushie treat.

The Traveler Beer Co. has four shandies available, including this pineapple version that combines wheat ale with pineapple juice. If you’re looking for something different, try the blackberry, pumpkin, or winter shandies, but it’s hard to beat the pineapple in the dog days.

Goose Island’s C.A.L.M. Radler is like the beer equivalent of a spa treatment for your mouth. It’s a wheat ale that’s mixed with cucumber, mint, and lime soda that will soothe whatever ails you on those hotter than hot August afternoons.