Clocking in at a strong 8 to 10 percent ABV. these holiday beers are definitely brewed for “Eight Crazy Nights”. 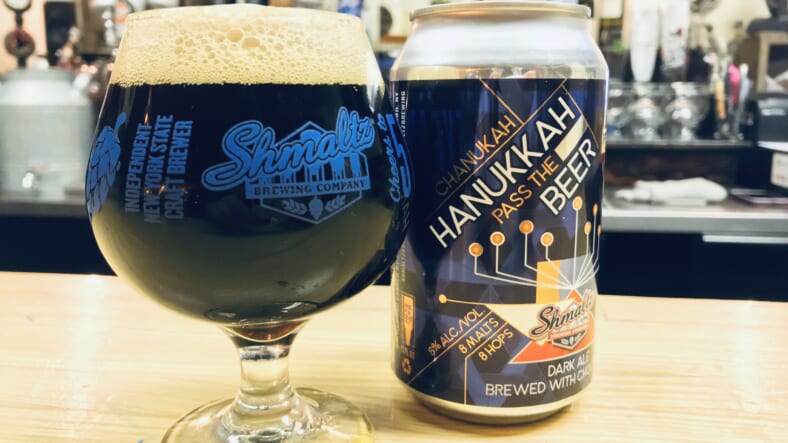 Shmaltz Brewing, notable for hilarious past holiday offerings like 2015’s Shtick in a Box, turns 23 this Hanukkah. As the “only Jewish celebration beer company in the country” (according to Shmaltz), the New York brewery is releasing a celebratory new official Hannukah beer, available in 12-ounce cans sold in packs of four.

You can find Shmaltz Brewing products in New York via distributors such as Gasko & Meyer and S.K.I. Beer. Country-wide, the seasonal suds are also available from Artisanal Imports and distributors you can find on Shmaltz’s website.

Here’s their full new lineup, just in time for playing Adam Sandler‘s “Chanukah Song” on a loop as you open 8 Crazy Nights of perfectly okay presents.

Chanukah, Hanukkah: Pass The Beer is a chocolatey triple brown, with holiday-appropriate 8% ABV and some nice, toasty hops and vanilla notes.

The Hop Momma New England-style IPA is a fruit-tastic blend of peach and apricot with a dash of habanero, according to Shmaltz. But don’t take their word for it, it was awarded the Gold in World Beer Championships.

Shmaltz’s Mazel Tov Cocktail is a very limited edition, available only via draft—so you’ll need to head out to where Shmaltz’s is sold. It’s a “dark, tart, tasty” blend of barrel-aged beer. Lastly, there’s Funky Blender #3.
It’s also a draft-only limited edition. Barrel-aged and made from a combo of Bittersweet Lenny’s R.I.P.A., Bock Bock, and St. Lenny’s, it’s clocks in at a hefty 10% ABV.

So indulge, it’s the holidays and these may not all last a full eight nights. Unless a miracle happens.