Sliced Ketchup Is Here To Keep Sandwiches Dry, And People Have Opinions About It 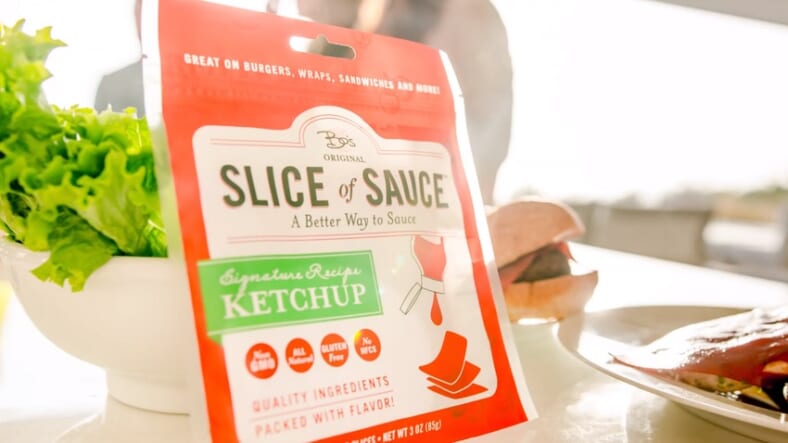 We don’t actually want to rag on people trying to bring something new to the supermarket shelves. That’d be wrong. At the same time, converting venerable old ketchup into something that looks distressingly like a strawberry Fruit Roll-Up is a little unsettling.

That’s what entrepreneur Emily Williams is doing with a Kickstarter campaign for Slice of Sauce™, “an All-Natural, No-Mess ‘Slice’ of Ketchup.”

That’s right. “Slice” twice. They really want you to know it’s a slice.

Should it one day lurk on your store shelves, know its full name is “Bo’s Original Slice of Sauce™.”

To its credit, the campaign is very professional, and it has already reached and exceeded its $15,000 funding goal. Here’s what Kickstarter investors are backing:

• Slice of Sauce™ is an update to ordinary condiments. The slice is a tantalizing layer of flavor and lets you enjoy a perfect portion with every bite.
• We’ve got a clean label. Our ingredients are non-GMO, gluten-free, all-natural with no artificial flavors, preservatives, or high-fructose corn syrup.
• It’s so easy to add a slice. Because it’s in slice form, there’s no sticky mess or soggy bread, no “liquidy” separation and no uneven squeezing from a part-empty bottle like with many traditional condiments.• Take it anywhere. Slice of Sauce™ needs no refrigeration, so it’s great for lunchboxes, picnics, barbeques, hiking and camping, lunches at your desk or eating on the go.

Well, hell. We’re pretty much convinced. Social media reactions, however, indicate others may not be as easily sold. Some seem downright offended.

We’re not so sure it’s a political statement, man.

I literally thought of the idea of a “slice of sauce” yesterday but then immediately thought it was a bad idea https://t.co/lwErWYsUq1

This guy’s just mad he didn’t trademark the idea first.

Now people are just being mean.

We’re still thinking about the opportunities this product might present for household confusion. The resemblance to Fruit Roll Ups could cause the condiment equivalent of mixing Skittles with M&Ms.

Bring on the slices.