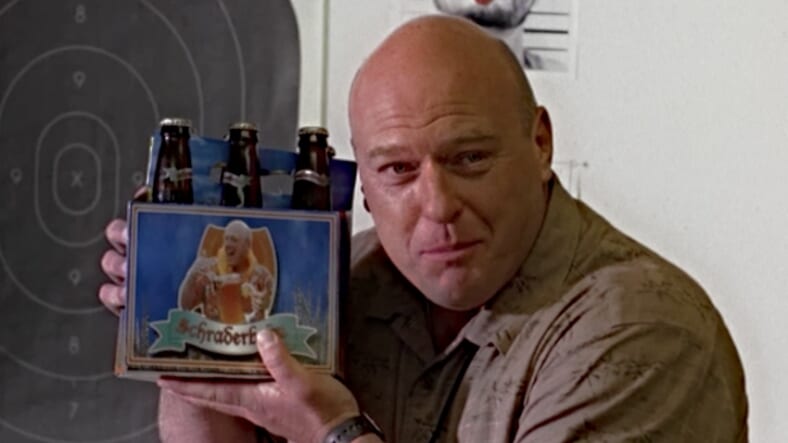 Few TV series have captured the fact that life is a mix of goofy, funny, and tragic like Breaking Bad. One example from Bad was anti-hero Walter White’s (Bryan Cranston) brother-in-law, Hank Schrader.

Played by Dean Norris, Hank was a deadly serious law enforcement officer and a real guy with dumb suburban dad pursuits—like making his own craft beer, Schraderbräu, in his garage. Hank met a sad end, but his beer is apparently going to live on as a real brew, if Sony Pictures is serious about the trademark they just filed for the name.

The Blast discovered the filing and reports that Sony also has plans to use Schraderbräu in marketing “drinking glasses, bottle openers, t-shirts and signs.”

Dean Norris is down with the whole deal, too, reports The Blast:

Norris is actually involved in the the new line of Schraderbräu, and has been teasing production of the beer on his social media. “Smells like silky perfection,” Norris said while smelling handfuls of ingredients.

Any fan worth his or her salt has to wonder what’s up with this, given that Bad ended its run years ago and its prequel Better Call Saul has one or two seasons left at best. Why boot up a Schraderbräu line of merch now?

Money is the obvious answer, but the news that Vince Gilligan and company are making a movie about Jesse Pinkman’s post-Breaking Bad finale life indicates they—and Sony—believe there’s plenty of life left in that fictional universe. (Update: The Hollywood Reporter unequivocally confirmed that this movie is in the works on Feb. 13th, and that it will first come to Netflix before broadcast on AMC.)

There’s no news as to when the merchandise will hit the market if ever, but when it does, let’s hope they start with the beer. Probably nothing better to have on hand the next time you’re down for a Breaking Bad binge-watch on a snowbound weekend.