A Washington D.C. Bar Has Made the World’s First Sound-Stirred Cocktail

Get the fascinating first look at how America’s weirdest drink was created. 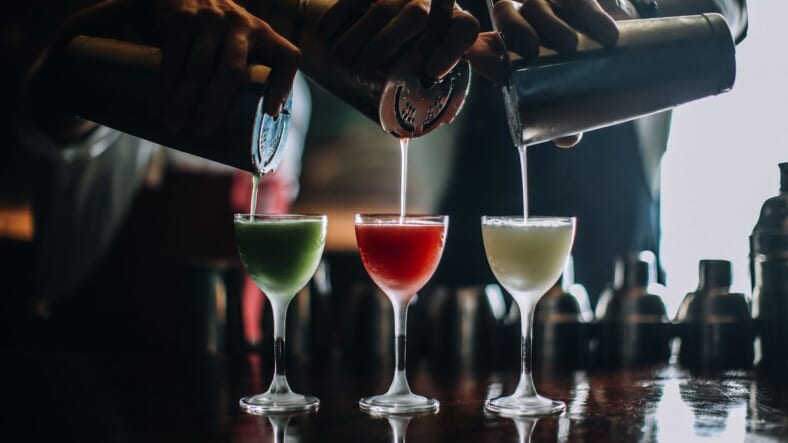 The award-winning cocktail wizards at Washington, D.C.‘s The Columbia Room have come up with their wildest innovation yet—stirring a cocktail with sound.

More precisely, the bar takes advantage of cymatics, in which specific vibrations create or manifest into physical forms. In this case, by using a meditation or singing bowl to vibrate a punch-style cocktail held within it, the sound waves actually stir and mix the drink together.

See for yourself in this fascinating first-look video of how it’s done:

As far as they know—minus a few experiments with tuning forks—The Columbia Room’s singing bowl stirred cocktail is the world’s first such creation. So how in the hell did they get that idea?

“Our brilliant chef Johnny [Spero] was researching sound waves and found some videos about different ways of displaying cymatics, or ‘the use of frequency to physically manifest sound waves into solids or liquid,'” explains beverage director J.P. Fetherston.

“This led to the singing bowls, which are used as both instruments and as a tool for music therapists, sound healers, and yoga practitioners,” Fetherston continues.

“We saw it as an interesting means to both gently agitate a cocktail, so yes, ‘stirring’ it in effect, but also produce a soothing tone that will hopefully have a physical effect on guests. This tied it to research we had seen about the ways that different sounds and sound waves can affect what we taste.”

Some ideas are just too fun and too unique to ignore, and you can count on The Columbia Room crew to be the ones that explore them.

“The most exciting aspect of these menus to us is to find these fascinating ideas or methods and try and pass them along to our guests,” Fetherston says. “Cymatics is really cool—we want to share that.”

The cocktail is served as part of The Columbia Room’s new tasting menu dubbed Spectrum.

The four-course cocktail and small bites pairings lineup includes the Sound course we’ve been discussing, in addition to other thematic entrants such as Pick a Color—order a red, white, or green cocktail without knowing anything else, and Flavor—a cocktail showcasing all five flavors in each sip, including umami.

“This is by far the most intricate experience we have put together,” says head chef Johnny Spero.

“We looked at several different forms of spectrum like sound, light, color and flavor but I think the definition that inspired a lot of the menu was looking at spectrum as a classification of two extremes or opposite points. This really challenged us to find balance and harmony in very radical ingredients.”

His beautiful, elaborate dishes are served hand in hand with Fetherston’s cocktails. For this menu, he’s come up with dishes such as a pear dessert with kaolin, black cocoa, black sesame, marshmallow, and yuzu as part of the Time course, paired with your choice of an “older” or “younger” cocktail, each made with Cognac, Madeira, tea cordial, and beeswax.

A great theme and visual goes a long way, but if the drink or dish isn’t worth having, what’s the point? “We never intend for a theme to overshadow the cocktail or the dish, but the context it lends can elevate even the simplest of preparations,” Fetherston says.

The sound-stirred cocktail for instance, showcases L.N. Mattei Cap Corse Blanc, what Fetherston describes as, “a wine-forward, lightly bitter quinquina from Corsica,” as its base. “We add fino sherry, Copper & Kings American Craft Brandy, verjus blanc, and citrus ash,” Fetherston continues. “It has a lot of herbal notes, think sweeter herbs rather than savory, a touch of bitterness from the quinquina and citrus ash, and lots of vinous and grapey notes.”

The use of Copper & Kings is a special nod to the fact that the Louisville brandy distillery famously plays music in its barrel warehouse, vibrating the spirit in an attempt to move it in and out of the wood to aid in maturation.

This isn’t the first time the bar has made waves.

The Columbia Room took home Best American Cocktail Bar honors at the 2017 Spirited Awards, among a growing list of accolades.

The Drink Company team behind the bar is also responsible for D.C.’s uber popular Pop-Up Bar, a rotating pop-up currently in the midst of its springtime Cherry Blossom rendition.