Ham-Flavored Ice Cream Is Here, So Prepare to Pig Out

Introducing the porky new ice cream that nobody asked for. 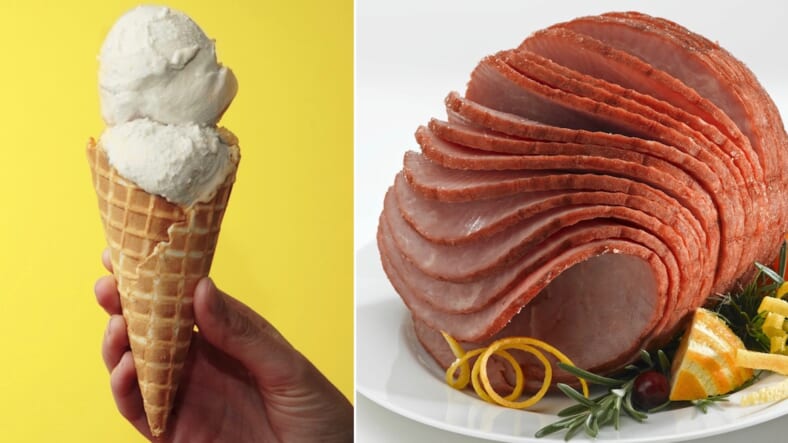 New Jersey has long been renowned for spawning an awesome regional delicacy known as pork roll (aka “Taylor Ham”), but they just took the Garden State’s favorite mystery meat into a way sweeter direction.

“Made with local maple syrup, housemade challah french toast and caramelized taylor ham, it’s about as crazy (awesome) as it sounds…” the dairy farm blurbed in an Instagram post.

Yep, pork-infused ice cream is totally a thing, and we can’t even hate on it.

Hey, bacon ice cream has been around for a while, and it isn’t half bad. Besides, people have done crazier stuff with ham before.

Inside every two and half gallon container of the ice cream is a whopping two pounds of Taylor ham. Damn, they really went ham with this stuff.

Fox News reports that the reactions have unsurprisingly been mixed.

The concoction has already stirred up a mix of responses from residents. Some said they were eager to try out the unique flavor while others already wrote rave reviews.

“That looks amaze!!!! Sounds great to me,” another added.

“A must try. I’ll be back for more and I look forward to tasting the rest of the only in New Jersey collection! Great job! You hit it out of the park!” another added.

Others were less enthusiastic about the new dish.

“Yuk pork, I guess fish is next,” another added.

“#taylorham is not meant to be a dessert. This is just basic fact. Let’s keep it that way,” one user wrote.

And still more were simply confused by the product.

“Is it pork roll or Taylor Ham…all pork rolls are NOT the same!” one Twitter user asked.

Windy Brow Farms clarified on Instagram that both “‘Taylor Ham’ and ‘Pork Roll’ are applicable terms for the Jersey delicacy.”

“We do not discriminate against those of you who deem it ‘Pork Roll’ and only ‘Pork Roll,'” the dairy farm added.