And it prevents dry mouth at the same time! 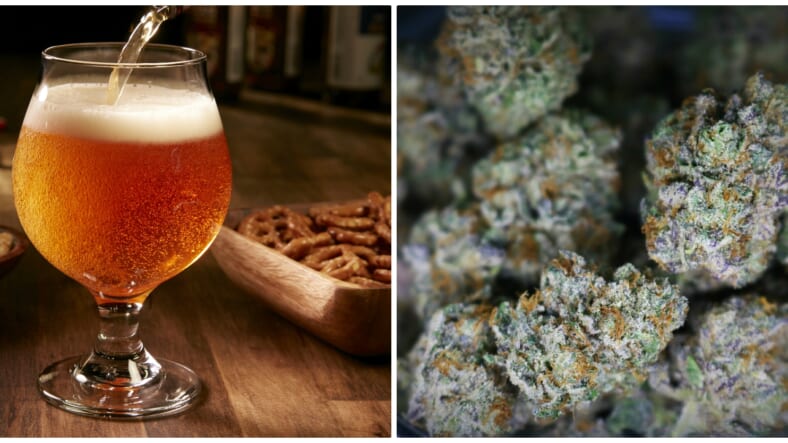 Calling all beer lovers who also enjoy getting stoned! All your dreams are coming true, because one very special brewery in Colorado is working on a weed-infused craft beer that will actually get you faded. Yessss.

This miraculous elixir is the brainchild of Keith Villa, who has a literal doctorate degree in brewing sciences, and is the very same person who founded and created Blue Moon, so you already know this beer is going to be absolutely delicious.

After doing God’s work at Blue Moon, Villa started his own brewery in Colorado called Ceria, where he’s working with a cannabinoid research firm called Ebbu to develop a THC-infused psychoactive beer that has the same onset time as alcohol, so it’ll get you perfectly cloud nined.

“I’m ready to introduce another high-impact brand to the industry again, this time with a new line of custom cannabis-infused craft beers. Today, the opportunity and the demand are here, inviting Americans to enjoy a more social way of consuming cannabis – by drinking rather than by smoking it or through ingestion of edibles,” Villa says on the Ceria website.

“CBD is not the component that most consumers look for,” he told Brewbound. “It certainly has its merits… But the THC is what gives people that buzz, which is similar to the alcohol buzz that people get from beer, spirits, and wine. A lot of consumers of cannabis look for that buzz.”

Now, in case you’re worried about getting cross-faded, let me put your mind at ease by telling you this beerijuana will be non-alcoholic, since beverages cannot legally contain both THC and alcohol. So you’re safe.

“Ceria will be brewed just like an alcoholic craft beer to maintain its beer taste and aroma, but will then be de-alcoholized prior to the infusion of cannabis,” he explains.

Plus, if you’ve ever accidentally eaten an entire edible, completely greened out, and had a terrifying experience where you thought you time-traveled to the 1800s or something, rest assured that this dank beer won’t disrespect you like that, because it’ll be available in three different strengths, so you’ll have a pretty good idea of how high you’re going to get.

Sounds amazing, right? The delicious flavor of beer, with the high of weed. A match made in dank green heaven. It’s high time (pun intended) the holy union between pot and booze happened, and in case you hadn’t heard, Corona and Modelo recently invested nearly $200 million in a Canadian weed startup, so it seems that weed beer is going to be a big thing in the next few years, and I. am. here. for. it.

Anyway, if you’re lucky enough to live in Colorado or will be passing through in the near future, be sure to stop by a dispensary and pick up a couple bottles of this good stuff when it hits the market. You’ll be glad you did.