This $60,000 Yamazaki 55 Is the Japanese Distillery’s Oldest Whisky Yet

Only 100 bottles of House of Suntory’s most decadent expression will be released globally. 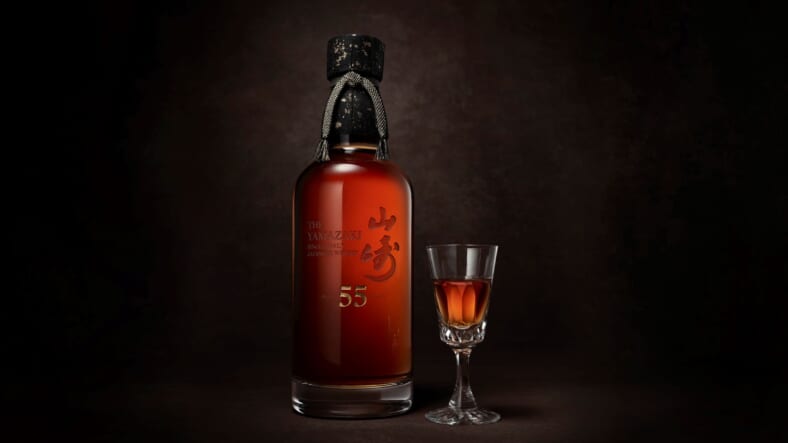 The latest release from House of Suntory’s flagship Yamazaki label is more than double the age of any expression that’s seen a global release from the Japanese whisky brand.

Joining 12-, 18- and 25-year single malts is Yamazaki 55, bottled at 46 percent ABV in 2020. The first of three rare amber liquids inside  was actually distilled in 1960 under the supervision of Suntory founder Shinjiro Torji and aged in famously difficult but rewarding mizunara casks.

The Financial Times reports that the other two components were distilled in 1961 and 1964 under Suntory’s second master blender Keizo Saji and aged in American white oak.

“Throughout the process of blending Yamazaki 55, I used as inspiration the passage of time and Wabi-sabi – the Japanese belief that imperfections can help to ultimately contribute to perfection,” said Fukuyo.

“While I often view other extra aged whiskies as art, I consider Yamazaki 55 to be more like a Buddhist statue: calm and mysterious, requiring time to truly enjoy the inner beauty.”

Here are the official tasting notes:

Color: Deep amber distinctive of Mizunara casks.Nose: A robust aroma redolent of sandal wood. A sweet, mature bouquet like well-ripened fruit.Palate: A soft, smooth first sip that blossoms in the mouth with flavor. A mixture of sweet and slightly bitter, followed by a woody note from the Mizunara cask.Finish: Slightly bitter, a fragrance like scented wood and a hint of smokiness. A sweet, rich, lingering finish.

With a price tag of $60,000, Yamazaki made sure that the presentation matches the quality of the whisky itself. A crystal bottle boasts the distillery’s name in sandblasted engraved calligraphy, while the age marking is adorned with gold dust and lacquer.

The bottle’s opening is wrapped in Echizen washi paper and bound with plaited cord crafted in the Kyoto tradition of Kyo-kumihimo. A bespoke box made also made from mizunara wood and coated with Suruga lacquer completes the display.

While dropping six figures on booze is a decidedly decadent act, there’s also a charitable angle. For each purchase, House of Suntory will donate $5,000 of each to the White Oak Initiative, a group committed to the long-term sustainability of America’s white oak forests.

You won’t find Yamazaki 55 at your local liquor store, so interested parties should get online to get make contact with House of Suntory.