Ring in 2018 With G.H. Mumm Champagne and the ‘World’s Fastest Man’ Usain Bolt

Celebrate your next victory with the perfect New Year’s Eve bubbly. 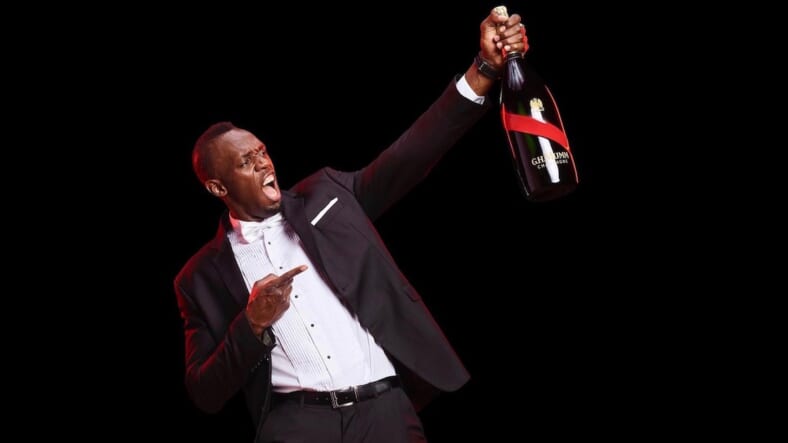 Bolt is a nine-time Olympic gold medalist, having won the 100m, 200m and 4×100m relay at three consecutive Olympic Games. But you’ve never seen him quite like this before.

In the video above directed by Luis Cervero, a nattily-dressed Bolt gets down with Jamaican hottie Yendi Phillips at a nightclub as Mumm Grand Cordon flows festively in the background.

Bolt eventually dances his way from the party onto an Olympic track, where a popping cork signals the start of the race. All the better to drive home Mumm’s message that it is the perfect Champagne to celebrate any victory, large or small, in 2018.

The Mumm Grand Cordon’s bottle also scores an aesthetic win with its striking appearance. It has no front label and instead features an eye-catching flourish from Welsh designer Ross Lovegrove: a red sash indented directly into the glass. It’s bthe ideal bottle of booze to bring to that New Year’s Eve Party you’re hitting this weekend, and it retails for only $44.99.

Both Bolt and Mumm are legends in their respective fields. Bolt is a revered Olympic champion, while Mumm is France’s leading Champagne house and the third biggest in the world, not to mention a brand that recently made Maxim’s list of Best Holiday Champagnes.

“Don’t win to celebrate,” Bolt says at the end of the video. “Celebrate to win.”