Weber’s Smart Grilling Hub Can Make Anyone a Genius Grillmaster

The all-new Weber Connect uses temperature probes to send smartphone notifications that say exactly when to flip your steak. 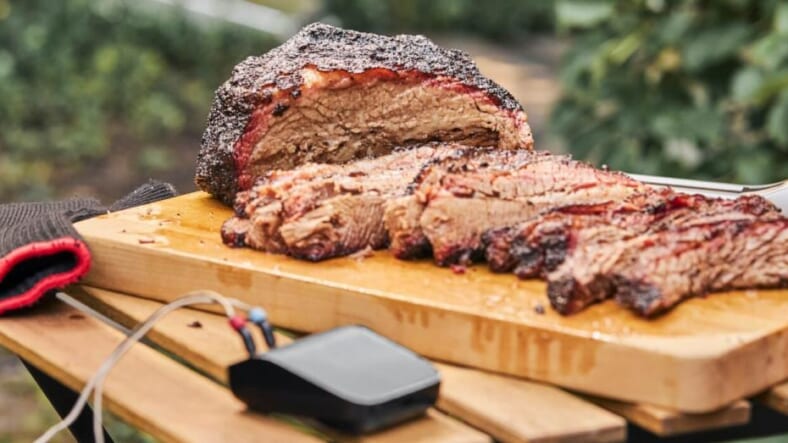 Cooking meat outdoors over fire is probably one of the most primal forms of food prep. It’s basically been going right for thousands of years, so does it really need any improvement? Weber thinks so, and once you look at their new Weber Connect Smart Grilling Hub, just announced at CES, you might just agree with them.

Weber partnered with June, a company focused on smart cooking, to create an innocuous device that sits by your dumb backyard grill with cables that attach to sensors inserted in the meat. It looks a little like a low-key medical device, and it performs a function vital to health: monitoring the temperature of whatever you’ve put on the flame.

Here’s the “smart” part—the device talks to a Weber app compatible with most smartphone operating systems, allowing you to walk away and have a beer with friends while still monitoring your meat until it hits that magical healthy temp (145-160°F or so for pork and beef, 165°F for chicken).

The app isn’t just a dumb monitoring device—it notifies the cook when they should flip whatever’s on the grill and can be tweaked to match your idea of the perfect temp, from bloody rare and screaming to charcoal black, if you’re into that. Better still, there are four sensors available, so you could track the chicken, beef, and pork—if it’s one of those get-togethers where you have to accommodate every kind of taste.

Don’t worry if you leave your phone behind or accidentally drop it in the pool, either; the temperature is also displayed on the Connect Smart Grilling Hub.

The Smart Grilling Hub will eventually feature Amazon Alexa support, which will permit even more fine-tuning.

Weber will make the Hub available everywhere in the early part of 2020, and it’s priced at a pretty reasonable $129.99.