There’s a Scientific Reason Why Some People HATE Cilantro

It’s in your DNA. 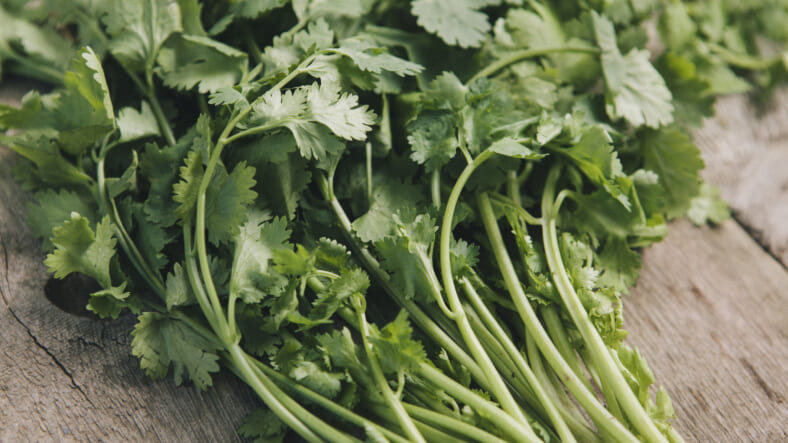 Hello, my dear friends, and welcome to a detailed and factual analysis on the science behind why some people think cilantro is awful, written by me: Someone who can’t stand cilantro.

Some cilantro-haters think the herb simply tastes offensive, like some crappy hand soap you’d find in a national park bathroom or something. But the rest of the cilantro-loathing community, including me, find it so goddamn heinous that I, personally, cannot find the words to describe what it does to me when that foul odor invades my sinuses. And I am not exaggerating.

To put it plainly, I would rather drink battery acid and suffer the consequences than put even the tiniest sliver of the evil herb in my mouth. Cilantro? More like cilantNO. I mean, I don’t know how it’s legal. It’s unholy.

But for everyone else, cilantro is not repulsive and is, in fact, delicious, and apparently adds lots of flavor to many foods. That sounds like a lie, but okay.

If you’re someone who loves cilantro, you’re going to enjoy this video of “Cilantro Bae” chopping up a giant bunch of the herb:

So many people messaged me on Snapchat on how satisfying this video was. Twitter, I’m gifting you the video of Rogelio chopping cilantro. pic.twitter.com/tvY5m5ffU7

But if you’re like me, you could probably smell the cilantro from your screen and wish he would just scrape that crap straight into the trash where it belongs.

Anyway…what’s going on with cilantro? Why do some people abhor this fragrant herb that many others love to sprinkle on tacos and guac? What is it about cilantro that makes it zesty and tasty to most people, while making a small chunk of the population question why such a wicked food item exists?

The answer to that is simple: Genetics. According to a massive survey of 30,000 people conducted by researchers at genetics firm 23andMe, around 10 percent of the population can’t stand the stuff, and it turns out that the deep hatred for cilantro is hard-wired into your DNA.

Now for some simplified hard science: The researchers, led by Dr. Nicholas Eriksson, found that people who think cilantro tastes like death share a genetic mutation called a single-nucleotide polymorphism, or SNP. These people have a different sequence of nucleotides in chromosome 11, which is directly related to your sense of smell through various olfactory receptors, including a specific gene called OR6A2.

OR6A2 is responsible for encoding a receptor that picks up on the scent of aldehydes, which are molecules that consist of a carbon center bonded to a hydrogen atom and double bonded to an oxygen atom. Various aldehydes have distinct smells, such as the ones that make vanilla, almonds, and florals smell the way they do.

But here’s where the problem is: The aldehydes in cilantro also happen to be the same aldehydes that are found in soap, which is why people who have a genetic mutation that directly affects the OR6A2 gene think cilantro tastes soapy, dirty bath water.

Did you get all of that?

There’s still research to be done on the genetic components that cause some people to hate cilantro, but for now, this is a pretty solid explanation that makes me feel better about my deep hatred towards an herbal plant.