10 of the Most Powerful Handguns on the Planet

Get locked and loaded with these ridiculous hand cannons. 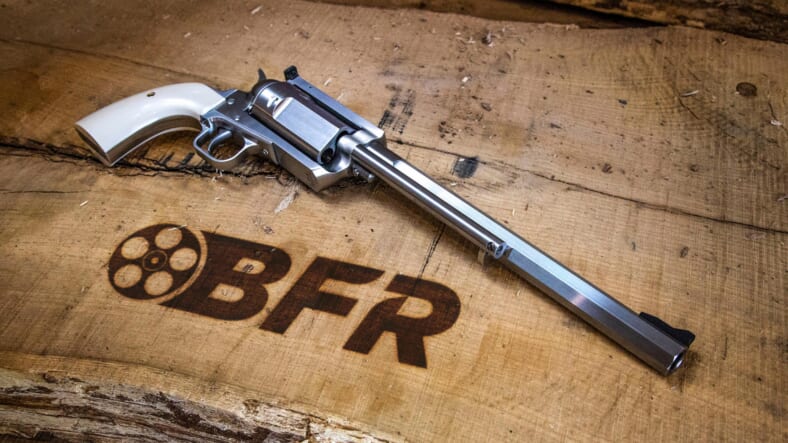 The Smith & Wesson .44 Magnum blasted the big-bore handgun into pop culture way back in 1971, as the preferred sidearm of Clint Eastwood’s “Dirty Harry”.

Nearly a half-century later it still ranks among the most powerful production handguns available, but there’s no shortage of modern-day power pistols that are even more formidable.

Many of these bullet-spitting monsters come with shoulder slings and bipods for hunting, and fire rounds big and fast enough to drop bear, elk, and buffalo, or even puncture steel plate. And of course, they’re a hell of a lot of fun to shoot at the range.

Now let’s get fired up with ten of the most powerful pistols in the world.

This may be the scariest production revolver on the planet, if you’re judging by sheer stopping power. It’s got the kind of lethal .50-caliber punch you need if, say, you run into an angry grizzly in the Alaskan wilderness, or a brain-eating zombie in some post-apocalyptic wasteland.

The XVR 460 Magnum (X-treme Velocity Revolver) has the highest claimed velocity in a big-bore production gun: that hunk of lead is moving at an incredible 2,300 feet per second. Plus, the stand and scope are seriously bad-ass.

You’ve seen it in Predator, Snatch , and Lock, Stock and Two Smoking Barrels. Revolvers can deliver higher velocity, but the Desert Eagle is about as powerful as semi-automatic handguns get.

You want a Big Fucking Revolver? From the company that makes the Desert Eagle, meet the Magnum Research BFR (Big Frame Revolver), a massively over-built handgun that fires the largest rounds possible. Chambered in .450 Marlin, the BFR will shoot an enormous 350-grain bullet at 1,814 feet per second.

One shot, one kill. This single-shot pistol has interchangeable parts with its big brother, a Thompson/Center hunting rifle. Take your pick of .45/70 Government, a bullet used in buffalo guns; a .44 Magnum slug; or even  a .410 shotgun shell. You only get one shot—make it count.

Any bloodthirsty pirate on the Spanish Main would have put this muzzle-loading single shot to good use. It fires a .50-caliber lead ball up to 1,400 feet per second, and it’s accurate to 50 yards–100 if you’re an expert marksman.

Super Redhawk is the ultimate Ruger wheelgun. Chambered in Ruger .480 with a box-stock Hornady round, the bullet flies at just under 1,200 feet-per-second. That’s a devastating combo of speed and power that will stop just about anything in its tracks.

Wyoming-based gunsmith John Linebaugh invented the first successful .50-caliber revolver back in 1986, and his signature gun is still a big shot. This brawny beauty can take down plenty of big game, including brown bear, bison, or a 300-pound wild hog.

This Austrian revolver is so big, you might think it’s fake. Inspired by the classic Colt Single Action cowboy gun of the mid-19th Century, the Zeliska weighs over 13 pounds, each .600 Nitro Express bullet costs nearly $40, and the cylinder alone tips the scales at more than 4 pounds. It’s the over-the-top epitome of crazy powerful pistols. Just watch the guy in the video below try to fire it.