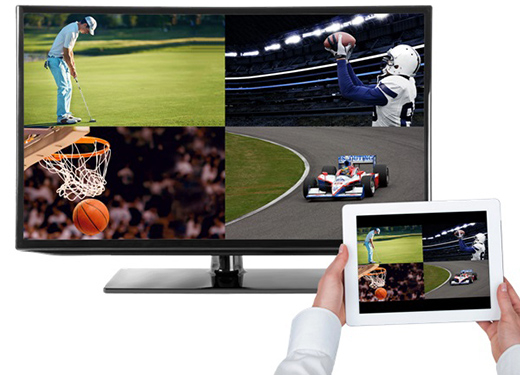 Although by the Immutable Laws of Entertainment, your TV must physically be tuned to the Oscars this Sunday, that doesn’t mean you need to attentively watch and actually listen to every second of the entire three-and-a-half-hour broadcast. In fact, why not focus on three other shows for most of it? That’s the basic idea behind the drool-worthy 4SeTV set top box.Attached to both its included HD TV antenna and your router, it can stream four over-the-air channels at once to the same Android or iOS tablet or (if you don’t mind straining your eyes a bit) phone. Likewise, it can push one channel to four different mobile devices.In either configuration, you don’t need a TV. (If ever there were a use case for Samsung’s ginormous Galaxy View tablet, this is it.) But its true elegance emerges when casting four shows onto your formidable flatscreen.The app lets you quickly choose (sets of) channels, select which one’s audio you’d like to hear, and adjust the volume and brightness levels with a simple swipe.

Once you order the device ($179), you’re set. No monthly fees to worry about.It has two major shortcomings: First, it requires a physical Ethernet connection, as opposed to connecting wirelessly to your router as you’d expect. Second, by design it doesn’t offer DVR functionality. So like when watching the tube in the old days, if you miss it, you miss it. (And then have to wait the unfathomable 90 seconds until some user around the world posts it to YouTube.)On the other hand, you can also daisychain boxes together so that multiple users can each have their own four channels on their tablets. So that rocks. And gets us one step closer to the Back to the Future vision of barking out multiple channel selections and having them appear on a giant video wall.