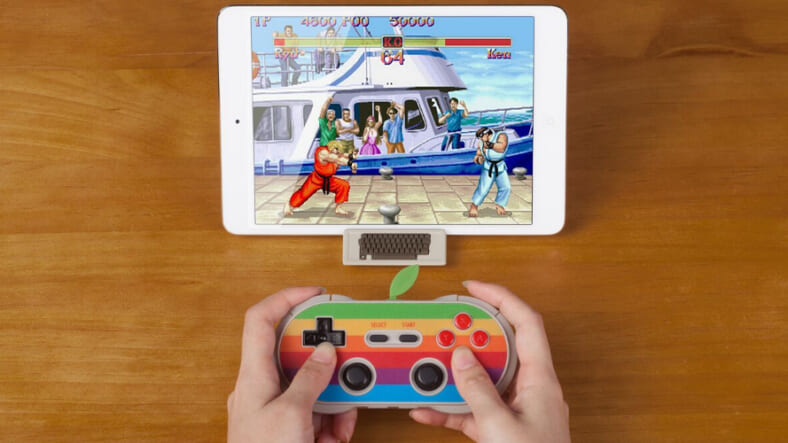 Being an Apple fanboy can be expensive at times—whether it’s buying one of their super stylish, overly hyped phones for over $800 or picking up a piece of vintage memorabilia for $815,000—but not here.The 8Bitdo AP40 wireless gaming controller pays homage to Apple’s 40th anniversary with the rainbow stylings of the fruit company‘s original logo. But better yet, it offers you a ticket to wireless gaming on your Mac or PC, iOS or Android mobile device, or (with the proper adapter) an NES or SNES system.

One last finishing touch: this slick gaming controller—which spec-wise shares a bunch in common with its NES30 Pro brother—comes with its own stand that resembles an old school Apple keyboard. When using the controller, it becomes a way to prop up your phone and tablet on-the-go.

Already over halfway to its Kickstarter goal, you can pick up one of these fancy fanboy gamepads for $49. For $85, you can bundle it with an adapter that lets you game with that Apple IIc you have lying around. Or for $69, they’re offering a specially packaged, limited edition controller and stand.