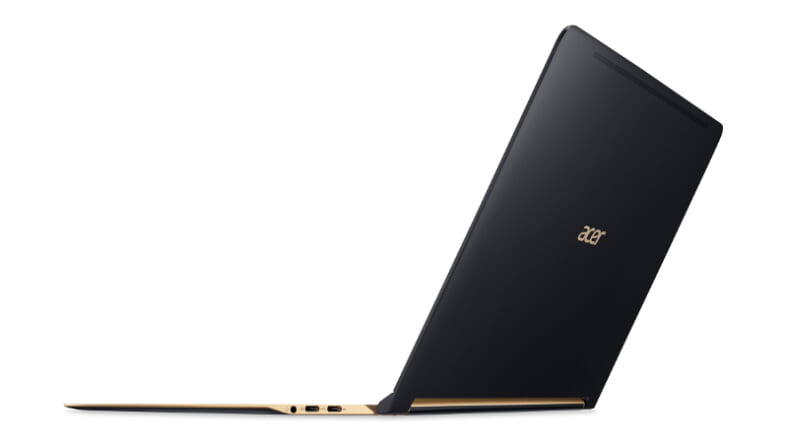 Just as with bikinis, when it comes to laptops, we say the smaller the better. That’s why we’re excited to hear the news from the IFA tech show in Berlin this morning that Acer just announced the slimmest notebook computer ever: the Swift 7, less than one centimeter thick.Svelte as it is, this 13-incher doesn’t skimp on specs. It boasts a 7th Generation Intel Core i5 processor, 256GB solid state drive, the latest 802.11ac Wi-Fi, dual USB-C ports and up to nine hours of battery life. In other words, it’s as fast and versatile as it is thin.

Its aluminum body features handsome black and gold tones. (Although not real gold, as HP used to decorate its luxurious limited edition Spectre, previously the world’s thinnest laptop.)Of course, inevitably folks want to know how any thin, high-performance rig compares to the MacBook Air, so here’s the skinny: Apple‘s similarly sized and priced machine is about half a pound heavier and over 40% fatter, but offers a third more battery life and (for more money) twice as much storage.

Naturally, you’ll want to know how the screen looks and keyboard feels to you. And you’ll have a chance to check out that and more in October, when the Acer store and other outlets will make the Swift 7 available for $999.