This Selfie-Snapping Camera Drone Is So Small, It Fits into a Phone Case

Just the thing to get the party started. 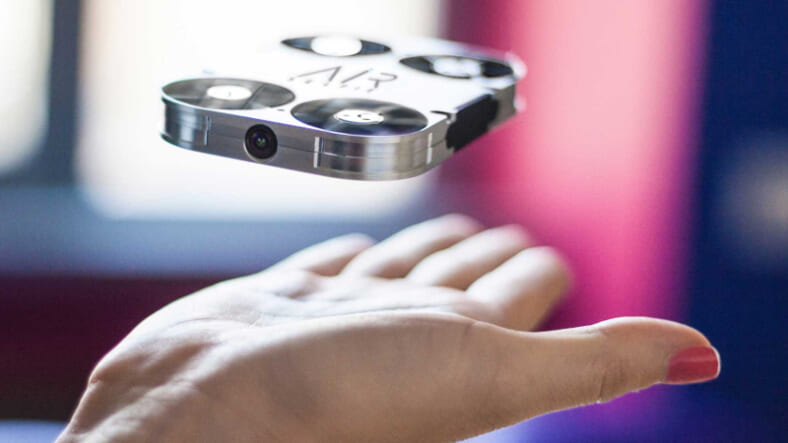 When the first camera phones came out sixteen years ago, folks questioned why anyone would need such a thing. Fast forward. Selfie sticks happened. Drones got popular. All paving the way for a product like the AirSelfie camera, essentially a highly portable flying camera.The product (we’re ashamed to repeat the name more than we have to) is designed to store and charge in a case that also conveniently fits your phone—if your phone happens to be an iPhone (6/S, 7/Plus), Huawei P9, Google Pixel or Samsung Galaxy S7 Edge.When you want to capture a more-than-arm’s-length perspective, the app on your phone launches it into the air, you have it take shots—one at a time, on a 10-second delay or eight consecutive, if you like—and then swipe the screen to tell it to land.

It seems similar to the following three products:Aerix Vidius HD ($75)This one’s definitely smaller; but only able to stream, not capture images. Thus it’s meant to be a tiny first-person drone, rather than a flying camera.The Pocket Video Drone ($100)It’s great how this one folds up to be as flat and pocketable as a phone (without worrying that the props will get crushed or fall off). Like the AirSelfie, Odyssey Toys’ indoor/outdoor flyer also takes HD video and can auto hover. But instead of relying on one of just a few phones, its physical controller smartly folds up to the same portable size and flat shape as the drone does. And not for nothing, it’s less expensive.Hover Camera Passport ($599)As we wrote back in May, this one’s pretty amazing. When folded up, it’s a little bigger than the AirSelfie. But the Hover Camera Passport can zoom along at up to 17 MPH—enough to follow you around walking and running—for up to 10 minutes. Plus, it features both face and body tracking and you can tell it to orbit you or just stay in place to capture a 360-degree panoramic. Way pricier, but way better.

Though the AirSelfie (yeech) will cost $300 when it retails, you can grab one on Kickstarter for around $190, with expected delivery in March.Really, as long as you don’t say the name, it’s fairly cool. Flying for up to three minutes and acting as 2016’s take on the selfie stick is a fun idea.