The Concept UFO is being hailed as a real gaming PC that’s the size of a Nintendo Switch. 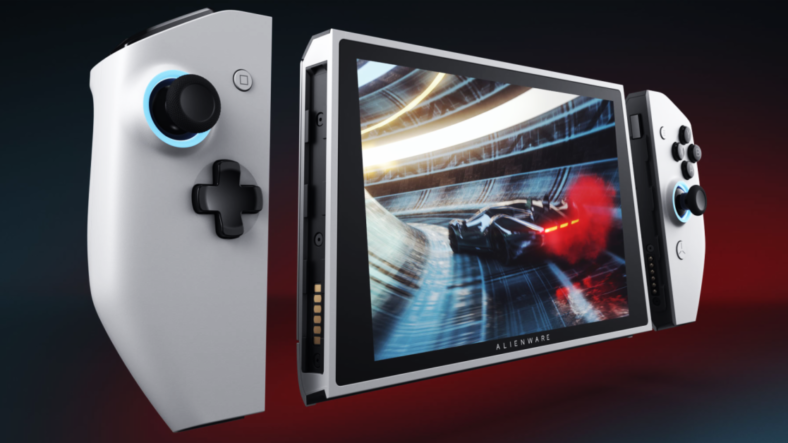 Alienware, Dell’s line of powerful gaming PCs, brought a portable console prototype to CES 2020 that could outperform the Nintendo Switch if it makes it to market .

The Concept UFO offers a look at what a full-fledged PC gaming experience might look like in a handheld device. The prototype seen here has an 8-inch screen with 1200p resolution, compared to the Switch’s 6.2-inch, 720p screen.

Players can use the Concept UFO as more typical standalone handheld. But users can also remove the to detachable controllers on either side of the screen, prop the screen up on a nearby table via a built-in stand, and magnetically lock the two controllers together to a central head unit to create a separate gamepad for more a desktop-like experience. The video below shows what the process looks like:

Unlike the Switch’s Joy-Con controllers, the Concept UFO’s controllers each have different button configurations and don’t appear to be usable on their own when not connected to the head unit.

The Concept UFO also runs a Windows 10 operating system. If Alienware added a keyboard attachment, this thing could conceivably be used for both serious gaming and as a high-performance tablet like a Microsoft Surface Pro.

Business Insider has more details on the Concept UFO’s processing power and capabilities:

According to Alienware, the Concept UFO uses a 10th generation Intel processor and will have access to WiFi, Bluetooth, and Thunderbolt. The device has two USB-C ports and can be controlled using a keyboard and mouse like a normal PC computer. Alienware hasn’t said anything about how long the battery life lasts, though the newest version of the Switch lasts about 9.5 hours at the outside.

As it’s a concept, there’s no word the Concept UFO’s price or release.