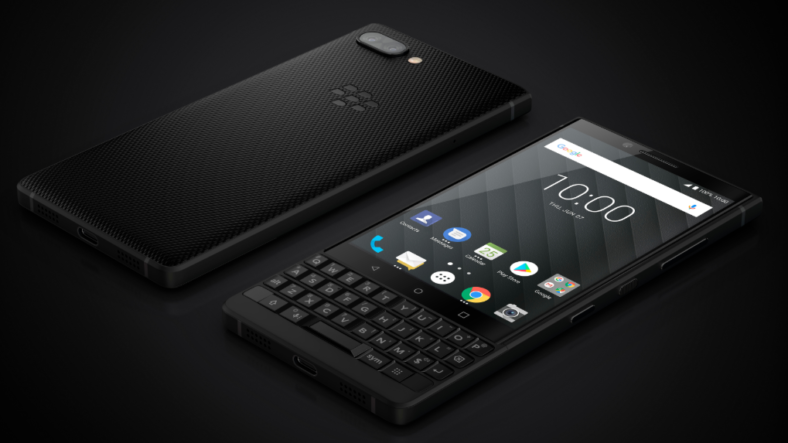 On Thursday morning, TCL Communication unveiled the most advanced BlackBerry ever in the form of the all-new  BlackBerry KEY2. It might make the old-school nickname “CrackBerry” new again.

It’s got that characteristic physical keyboard, beloved by anyone who’s ever wanted to throw an iPhone against the wall after autocorrect dropped another “ducking” for the f-word. BlackBerry makers also claim up-to-date security and privacy enhancements. It looks like the KEY2 may have a ton of features new to the BlackBerry line.

It’s running on Android™ 8.1 Oreo, and the KEY2 is the first BlackBerry with a dual-rear camera. The mystery button so many wondered about when seeing mystery promo images is the Speed Key, a kind of universal shortcut which can instantly bring up apps, contacts and other functions.

While you’ve definitely got a BlackBerry in hand when you grab a KEY2, it’s got a smooth, clean frame design which should make for an uncrackable CrackBerry. It’s got a practical grip to it, no slick, glassy iPhone backing which picks up every oily fingerprint.

While the familiar BlackBerry keyboard is there in all its glorious practicality, the KEY2 also has a touchscreen, so it’s got the best of both worlds, if you’re really into touching screens.

BlackBerry says the keyboard has also “been thoughtfully crafted to make on the go typing more immediate and effortless,” but with extra functionality—making for even speedier QWERTY typing than before.

BlackBerry claims one particularly remarkable feature on the KEY2: “up to two days battery life.” That’s an eternity in smart phone time. This comes from a “Smart Battery” which picks up user habits to meter power so it’s available whenever you need it.

The dual 12MP cameras function as well as a high-end camera with some sweet built-in functions, according to BlackBerry: “The BlackBerry KEY2 also introduces new capture modes, like Portrait Mode and Optical Superzoom. With Portrait Mode, users can now capture beautiful portrait photos creating more dramatic and professional looking images. In addition, Optical Superzoom makes it possible to capture better photos with greater details; even from further away.”

So, the cameras sound like they’re not too shabby. The BlackBerry KEY2 is supposed to be the “most secure Android smartphone,” and supports the claim by detailing an app that provides a quickly accessible security meter. It reveals the apps that might be draining the wrong kind of data and tweaks permissions.

The KEY2 seems to have been engineered with a very proactive approach to security in general, which has been a huge concern with Android phones and has become a bigger problem with iPhones in recent years, despite measures like unlocking with fingerprints.

Other secure features include better control of cloud storage use, which is pretty damn smart when you think about the danger of, uh, “private” pics making it onto some server controlled by Apple or Google.

The BlackBerry KEY2 begins shipping worldwide this month. Retail prices start at $649 USD, the cost in Euros is about the same.

If you want to know more about the BlackBerry KEY2 or pre-order one of your own, check out your BlackBerryMobile.com.