Alpine Tricked Out This Cooler with Some Serious Speakers

It’s a party in a box, ready to chill. 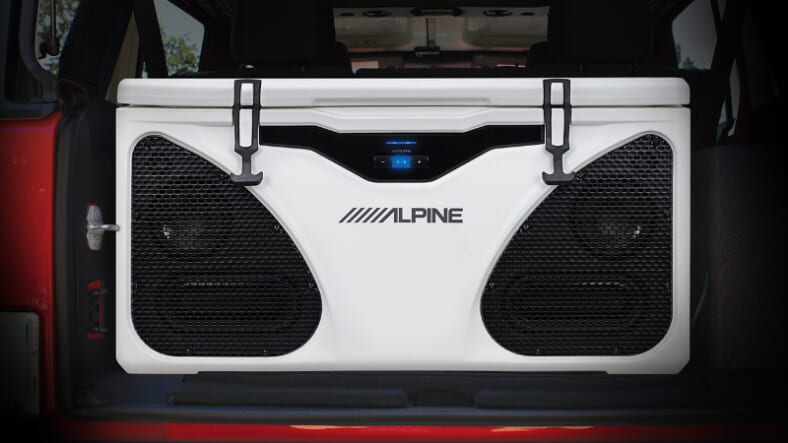 Lately, various folks have been retrofitting paintings, suitcases and all sorts of other stuff with Bluetooth speakers. So it was only a matter of time before someone got the bright idea to infuse them into a cooler. And what better peeps to do it than the audio experts at Alpine?Based on a Grizzly cooler, their ICE (In-Cooler Entertainment) system adds a pair of 90-watt speakers and still retains 56 quarts of storage space. In beer lingo, that equates to three cases of suds.

It’s spacious enough to house specially designed 1-inch high output tweeters, 5 1/4-inch high dynamic range woofers and two 4-by-8-inch bass radiators and still have room for brewskis galore because of the design choice not to include a battery.Thus it relies on 12-volt power from an external source such as your vehicle or a portable powerhouse like Goal Zero’s Yeti 400 that pushes out 15 amps. Best of all, it’s able to automatically detect when your vehicle’s battery’s getting low, so you don’t kill it.

At $1,500, the PWD-CB1 (its less catchy name) may seem pricey. But then again, the block-rockin’ Kube that we heard back in January is literally twice as much. In that sense, fifteen hundred doesn’t seem so crazy for a great cooler and sweet set of speakers.

In fact, the only thing we’d change is maybe going bigger, adding a beefy battery, putting some wheels on the cooler and turning it into your own personal electric party-to-go.If someone’s not already working to make that dream a reality, they should. And ideally, by the holidays would be swell.