Here’s what you need to know about Apple’s new devices coming this fall. 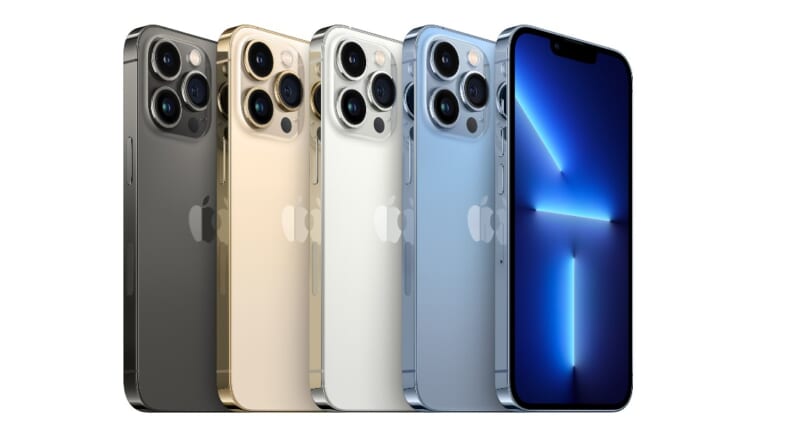 Apple unveiled the new iPhone 13, iPhone Mini, iPhone 13 Pro along with an updated iPad, an overhauled iPad Mini and the Apple Watch Series 7 at the tech giant’s California Streaming event on September 14. Check out all the upgrades, specs and details of Apple’s latest wave of devices coming this fall.

Easily the most anticipated announcement goes to the iPhone 13. Apple has chosen not to stray far from the previous design this year. The notch is 20% smaller, the battery is bigger, the screen is brighter thanks to the Super Retina XDR display and the camera array is configured differently but still features similar, powerful lenses.

Apple has also gone with the A15 Bionic chipset this year which keeps the iPhone 13 ahead of the competition in terms of power and quickness, making it faster than any phone on the market, including the iPhone 12. And like the iPhone 12, there’s an iPhone 13 Mini coming for anyone that prefers a more petite smartphone without sacrificing functionality.

The new iPhone 13 Mini starts at $699 and the full-sized iPhone 13 starts at $799, both with 128GB of storage and with options for up to 512GB. Preorders begin on September 17th and the phones should make it to customers September 24th.

Coming in four finishes, including a sexy new sierra blue, the iPhone 13 Pro also borrows much from its predecessor in terms of looks. Moderate bumps to system architecture and battery life abound here.

That last feature might have quickly become a joke on social media, but the iPhone 13 Pros camera array does seem up to the task, now upgraded with night mode on each lens, a 3x telephoto (up from 2x in the 12 Pro) and macro capabilities for insane close-up focus.

The iPhone 13 Pro starts at $999 and the 13 Max starts at $1099. There’s also a 1TB option for both flavors of the 13 Pro for the first time ever. Preorders start Friday and the iPhone 13 Pro will make it to customers on September 24th.

Apple’s top-selling wearable has seen some serious innovation with the new Series 7. A smaller bezel makes for a bigger, brighter screen without changing the form-factor in a noticeable way. Apple has also rethought the software behind the little wearable to better suit that larger screen size, adding larger buttons and a full keyboard for easier responses in messages without ever pulling out a phone.

Beefed up front crystal screen and higher ratings for water and dust resistance makes the Apple Watch Series 7 more durable than ever. Tons of color and material options as well as even more swappable bands make the Series 7 perfectly customizable to fit anyone’s tastes. The Apple Watch Series 7 starts at $399 and will be available later this fall.

The entry level iPad may not have the same oomph as the iPad Pro or the iPad Air but that’s fine for the average user who just want to use it to consume content, browse the web or play games.

Bumps to graphics power, camera array and image processing and the addition of Center Stage, a supremely useful upgrade to video calling that was introduced in the most recent iPad Pro, are the signature upgrades here, thanks to the A13 Bionic processor under the hood and the 12MP wide-angle front-facing camera.

The new iPad starts with 64GB (a double up from the previous iteration) and starts at $329. Preorders are available now and the new iPads will make it to customers next week.

It’s been a long time since the iPad Mini got any love but that’s exactly what happened today with the smallest iPad getting its biggest upgrade ever. A new form factor puts the iPad Mini on more level footing with the rest of the iPad family.

Wall to wall screen, A15 Bionic chip, USB-C connectivity, new color options, liquid retina display, 5G cellular data and compatibility with the second-generation Apple Pencil are HUGE upgrades for the little tablet. Add all of that to the new 8.3” screen and this new iPad Mini is about to be the most portable iPad ever without sacrificing performance at all.

This one starts at $499 and preorders are available now with the iPad Mini set to hit users next week.