For when you need that first cup before you even get out of bed. 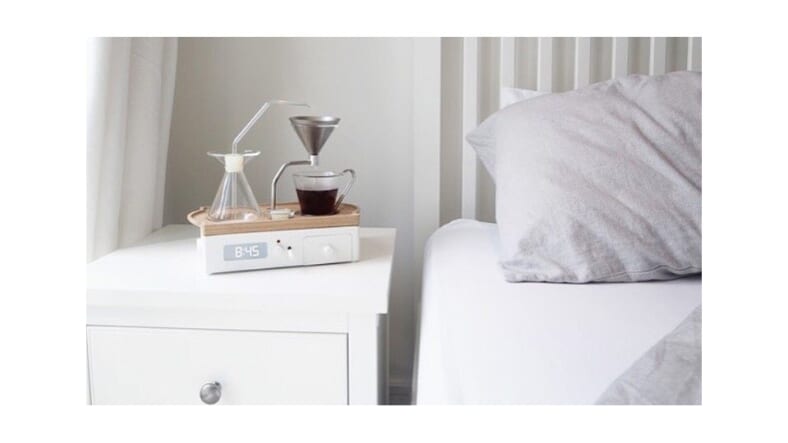 What started a couple of years ago for London-based designer Josh Renouf as a 12-week research project may forever change the way you go to sleep and wake up.In response to his findings—that doing a consistent bedtime ritual affects your quality of sleep and “having a sensual awakening can leave you feeling stimulated to seize the day ahead”—he created The Barisieur, a bedside coffee and tea brewing alarm clock.

In preparing it as an actual product for the masses, a lot has changed in the past year or two; but the concept remains the same: the night before, you fill the boiling vessel with water, scoop your favorite grounds from the integrated compartment, drop them into the metal filter and set the timer.In the morning at the desired time (before, as or after the alarm chimes), a special induction coil heats the water, which steams up and pours through the grounds making your morning java. It even keeps a splash of milk chilled for you.

Though the Kickstarter campaign has already gone through its first two earlybird levels, it still has 60 percent more funding to go. In the meantime, you can get one for just under $400. (It’ll retail for about $500, which for a coffee maker seems a little steep.)Sadly, even if it reaches its goal, it’s not planned for delivery until a year from now. So until then, you’ll have to stick with whatever caffeination system you already have in place.