This Custom 1911 Handgun Is a Star-Spangled Stunner 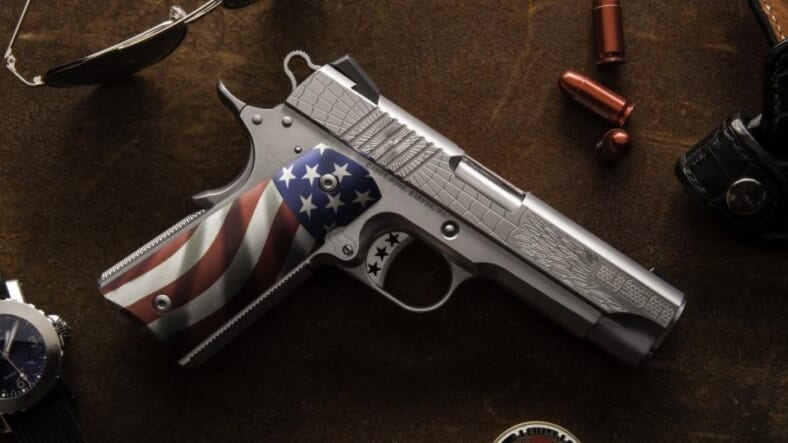 Cabot Guns has unveiled a new 1911 handgun that just might be the most patriotic-looking pistol you’ll ever see.

While the Pennsylvania-based gunsmith is known for crafting some of the priciest custom pistols in the world—namely a pair of $4.5 million Colt .45s that were cut from a rare fragment of the Gibeon meteorite—their latest eye-catching piece is not only expertly engineered, but considerably more affordable.

The tattoo-inspired cobweb etching and tire-tread “USA” markings on either side of the stainless steel slide, as well as the American flag-adorned grips, are the brainchild of Detroit-based designer Joe Faris, an alum of the reality show Project Runway.

Cabot says the elements are meant to represent “the speed of the bullet leaving the barrel” and honor Motor City’s high-octane history.

Both the frame and slide are made of 416 stainless steel that was hardened using Cabot’s proprietary process. “Trinity Stripe” serrations and a beveled magazine give the pistol plenty of tactility.

An optional gold bead front sight and low-mount rear sight combined with a custom aluminum trigger ensures that a capable shooter can hit a 1.5-inch spread or tighter at 25 yards.

The Commander-spec 4.25-inch barrel makes the pistol a solid candidate for concealed carry. Cabot offers it with .45 or 9mm chambers, but you’ll definitely want to go with the former to get the true 1911 experience.