Which type of handgun is better to carry for self-defense? 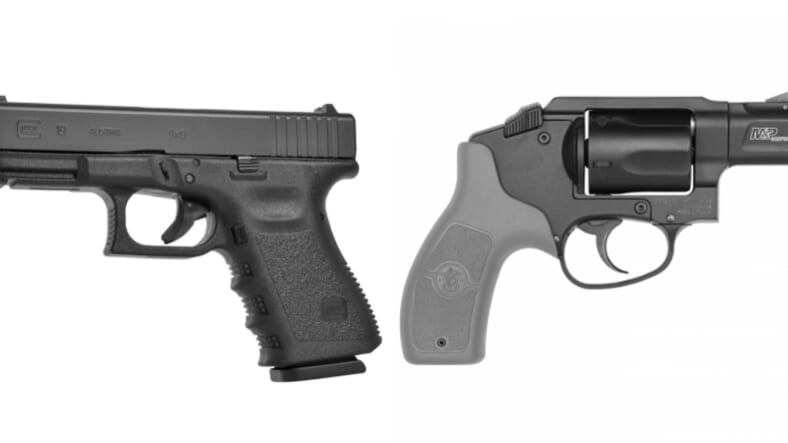 In states where it’s not legal to openly carry a firearm, gun owners need to obtain a concealed carry license if they want to arm themselves outside their homes. By definition, said firearm needs to be carried in “such a manner as to not be discernible by the ordinary observation of a passerby,” which practically rules out every option except a compact or subcompact handgun.

But even with that narrow purview, there’s still a major decision to be made: Should one pack a semi-automatic pistol or a revolver? The former offers higher cartridge capacity per load in a more modern design, but the latter’s simple action offers nearly infallible reliability in a lightweight platform under normal conditions.

Matt E., an editor at the The Firearm Blog, recently penned a detailed article on this very subject, beginning with the pros of a semi-autoutmatic pistol. The capacity offered by an integral box magazine generally matches or exceeds the capacity of a four-, six- or eight-shot revolver—Matt notes that the today’s double-stack mags provide round counts in the double digits. But he also describes a second, slightly less obvious advantage to the semi-auto:

Little micros like the [Sig Sauer] P365 are very enjoyable to shoot and it’s very possible to take it out for a full day of shooting at the range…In the past, there were typically two types of semi-auto handguns: small concealable handguns and guns that were enjoyable to shoot at the range. With the new modern offerings on the market, these two categories have now joined into one. This is possible with the addition of larger magazines and better recoil systems in the modern semi-autos.

Meanwhile, the simplicity of revolvers offers two distinct advantages—they are both  reliable and easy to use. Even a brand new shooter with zero experience can point and fire (though anyone who carries should be practicing regularly at the range). Here are a couple more of Matt’s thoughts on points for the revolver:

Having something like a Smith & Wesson 642 with a self-contained hammer is great for having a snag free pocket pistol. If you need to wear formal clothing or just want to have a lazy day, a pocket revolver is perfect. One of the big drawbacks with having a high capacity micro [semi-auto pistol] is that it can sometimes have a little bit of weight to it when carrying in the pocket.

When it comes to drawbacks, the semi-auto pistol requires a rack of the slide to chamber the first round, which isn’t necessarily intuitive for a newbie. Hammer-fired semi-autos like the Sig Sauer P2022 (this author’s CCW) have entirely different trigger pulls depending on whether the hammer is cocked to fire in single-action or the hammer is down to fire in double-action.

Matt also discusses real-world scenarios in which the semi-auto design can cause problems:

The clear drawback to the revolver is limited capacity. And while they’re plenty reliable when properly cleaned, most revolvers are much more susceptible to the elements because of the exposed cylinder. As Matt notes,

If you throw something like [a Smith & Wesson 642] into mud or sand, it will have serious issues firing and can sometimes throw the timing off making it incredibly dangerous. Something like a Glock won’t have the same issues and won’t have a catastrophic failure like a revolver will. I know this may seem like an unlikely circumstance, but throughout various tests I’ve conducted with a number of revolvers, it doesn’t take much to create a stoppage in the cylinder.

Ultimately, Matt picks the semi-automatic pistol over the revolver. Which weapon would you carry?