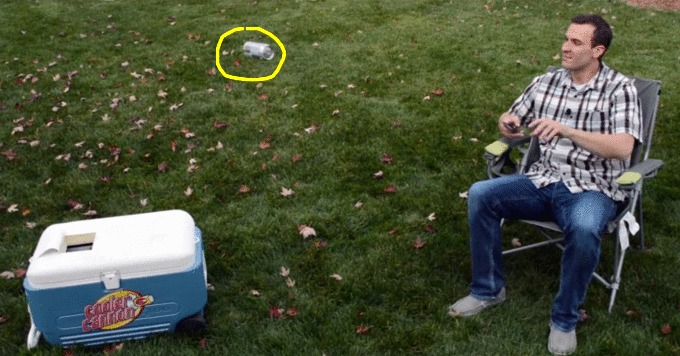 Wouldn’t it be great if beer literally flew into your hands at the press of a button? Thanks to an ingenious invention called the Cooler Cannon, that fantasy is now a reality.

Load it up with ice and 18 cans of your choice brew. Pull out your smartphone, press a button, and watch in utter amazement as the the teched-out cooler catapults a beer into your thirsty hands from up to eight feet away.

Too drunk to catch it? No problem—a new beer is chambered and ready to launch in just two seconds.

It may seem like a novelty item, but we’ve brainstormed a short list of alternative applications for this incredible piece of tailgating gear.

Unfortunately, it’s not in production yet, but the date for a crowdfunding campaign is reportedly forthcoming.

Pre-order the Cooler Cannon now for the projected price of $195 online, and follow them on Facebook to stay up to date on the latest news.

In the meantime, you can always order the Cruzin Cooler, a cooler-electric scooter hybrid that carts you around at up to 13 MPH.

Prices for that start at $400.00. Tailgating has never been easier.